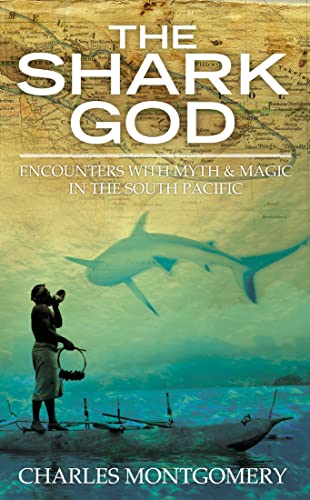 The Shark God
by Charles Montgomery

A daring journey to confront legend and sorcery in a forgotten corner of the South Pacific.

The Shark God: Encounters with Myth and Magic in the South Pacific by Charles Montgomery

A daring journey to confront legend and sorcery in a forgotten corner of the South Pacific.

Deep in the stacks of the Bodleian Library, a young man opens a small packet of sand, buried among crates of notes from the first missionaries to the South Pacific. A memento from the scene of a century-old murder, that envelope and its dusty contents send Charles Montgomery on a remarkable quest to find its island source in the forgotten archipelago of Melanesia.

Retracing a voyage made by his missionary great-grandfather, Montgomery seeks out remote shores where gospel and empire never took hold. He discovers communities still steeped in `kastom' - the indigenous religion of spirits, shamans and sorcery - and he meets a bizarre cast of barefoot prophets, witch doctors and gun-runners. Montgomery is confronted by the ongoing struggles between the old world and the new, as Christianity vies with shark spirits and sorcery for the salvation of souls.

By turns funny and profoundly moving, `The Shark God' blends travelogue with history rich in tales of magic, mischief and violence, and it paints a vivid portrait of a place where the unseen world is every bit as powerful as the physical one. As the author is drawn into the world of miracles, his adventure becomes a quest for the origins of myth and faith, and a metaphor for the transforming power of story.

`Montgomery's remarkable debut is a travel story as dark and twisted as one might ever wish to hear...richly seasoned with wonderful language.' Guardian

`As both traveler and writer, Montgomery is a thoughtful and entertaining guide, and his story has rich layers of history and anthropology.' New York Times

`As delicate and impressively beautiful as any essay of exploration that I have read in recent years...the quality of his prose seems matched only by the wisdom of his observations.' Simon Winchester, Globe and Mail

`By far the best book of the whole year, perhaps in any field...Adventurous, thorough in his research - the history is as compelling as the journey - and sensitive to the customs and character of the people he meets, Montgomery has produced a remarkable work. If you seek only one gift this Christmas, ask that it be ["The Shark God"].' Toronto Star

`"The Shark God" delves into the myth, magic and spirits of the South Pacific, deftly blending his own journey with that of his missionary great-grandfather.' Wanderlust

`A very entertaining book: anyone interested in travel, religion and the South Pacific should read it.' Tablet

Charles Montgomery was born in 1968 and spent his formative years on a farm on Vancouver Island. He has been a writer and photojournalist for ten years, and lives in Mexico City and Vancouver. This is his first book.

GOR001950888
The Shark God: Encounters with Myth and Magic in the South Pacific by Charles Montgomery
Charles Montgomery
Used - Very Good
Hardback
HarperCollins Publishers
2006-06-28
384
0007202482
9780007202485
N/A
Book picture is for illustrative purposes only, actual binding, cover or edition may vary.
This is a used book - there is no escaping the fact it has been read by someone else and it will show signs of wear and previous use. Overall we expect it to be in very good condition, but if you are not entirely satisfied please get in touch with us.