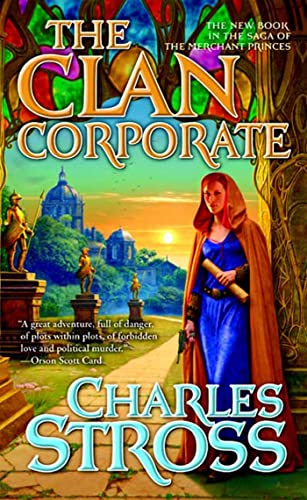 The Clan Corporate
by Charles Stross

Used Price
$15.99
inc. GST
Free Shipping in Australia
Miriam Beckstein has gotten in touch with her roots and they have nearly strangled her. A young, business journalist in Boston, she discovered that her family comes from an alternate reality, that she is very well-connected, and that her family is a lot too much like the mafia for comfort.
Reviews:
Trustpilot
Very Good

The Clan Corporate: The Merchant Princes 3 by Charles Stross

Miriam Beckstein has gotten in touch with her roots and they have nearly strangled her. A young, hip, business journalist in Boston, she discovered (in "The Family Trade") that her family comes from an alternate reality, that she is very well-connected, and that her family is a lot too much like the mafia for comfort. In addition, starting with the fact that women are family property and required to breed more family members with the unique talent to walk between worlds, she has tried to remain an outsider and her own woman. And start a profitable business in a third world she has discovered, outside the family reach (recounted in "The Hidden Family"). She fell in love with a distant relative but he's dead, killed saving her life.There have been murders, betrayals. Now, however, in "The Clan Corporate", she may be overreaching. And if she gets caught, death or a fate worse is around the bend. There is for instance the brain-damaged son of the local king who needs a wife. But they'd never make her do that, would they?

"The Clan Corporate offers more proof, if any were needed, why Charles Stross has become universally acknowledged as one of science fiction's major new talents." --Mike Resnick

"Stross and his feisty heroine are currently about the best practitioner and heroine the old motif boasts, and many are and will be the readers hoping for more than the three volumes they've given us so far." --Booklist

"Stross is a cunning writer." --Locus on The Clan Corporate

"Stross continues to mix high and low tech in amusing and surprising ways. . . .[he] weaves a tale worthy of Robert Ludlum or Dan Brown." --Publishers Weekly on The Hidden Family

"It's simply a great adventure, full of danger, of plots within plots, of forbidden love and political murder." --Orson Scott Card on The Family Trade

Charles Stross is the author of the bestselling Merchant Princes series, the Laundry series, and several stand-alone novels including Glasshouse, Accelerando, and Saturn's Children. Born in Leeds, England, in 1964, Stross studied in London and Bradford, earning degrees in pharmacy and computer science. Over the next decade and a half he worked as a pharmacist, a technical writer, a software engineer, and eventually as a prolific journalist covering the IT industry. His short fiction began attracting wide attention in the late 1990s; his first novel, Singularity Sky, appeared in 2003. He has subsequently won the Hugo Award twice. He lives with his wife in Edinburgh, Scotland, in a flat that is slightly older than the state of Texas.

GOR002007556
The Clan Corporate: The Merchant Princes 3 by Charles Stross
Charles Stross
Used - Very Good
Paperback
St Martin's Press
2007-09-01
320
0765348225
9780765348227
N/A
Book picture is for illustrative purposes only, actual binding, cover or edition may vary.
This is a used book - there is no escaping the fact it has been read by someone else and it will show signs of wear and previous use. Overall we expect it to be in very good condition, but if you are not entirely satisfied please get in touch with us.