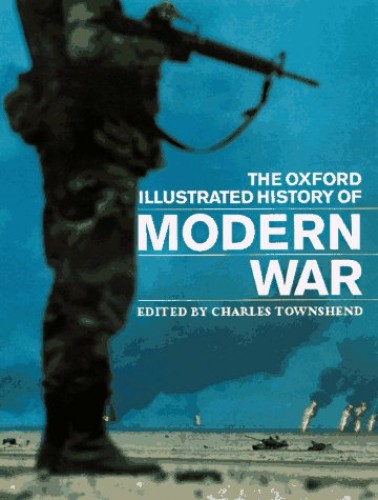 The Oxford Illustrated History of Modern War by Charles Townshend

How far has war shaped modern society and vice versa? How has it changed over the centuries between the introduction of firearms and the invention of the atom bomb? How is war waged today? This illustrated book offers an overview of military conflict throughout the last three centuries.

The Oxford Illustrated History of Modern War by Charles Townshend

How has war shaped modern society and vice versa? How has it changed over the centuries between the introduction of firearms and the invention of the atom bomb? How is war waged today? This excitingly illustrated book examines the techniques, technology, and theory of warfare from the 'military revolution' of the seventeenth century to the present day. The expert contributors explore major developments and themes, including the extraordinary achievements of Napoleon's armies; the role of nationalism in battlegrounds as various as the American Civil War and the former Yugoslavia; colonial wars; the concept and reality of 'total war'; guerrilla warfare and 'people's wars'. The Oxford Illustrated History of Modern War offers a comprehensive overview of military conflict over several centuries, with fascinating thematic chapters covering air and sea warfare, combat experience, technology, and even opposition to war. Contributors...; Jeremy Black, University of Exeter; John Bourne, University of Birmingham; John Childs, University of Leeds; Jean Bethke Elshtain, University of Chicago; Alan Forrest, University of York; David French, University College London; John B. Hattendorf, Naval War College, Rhode Island; Richard Holmes, Cranfield University; Richard Overy, King's College London; Douglas Porch, US Postgraduate Naval School, Monterey, California; Adam Roberts, University of Oxford; Mark Roseman, Keele University; Philip Towle, University of Cambridge; Charles Townshend, Keele University; Martin van Creveld, Hebrew University of Jerusalem
About the Editor Charles Townshend is Professor of History at the University of Keele. His books include Making the Peace: Public Order and Public Security in Modern Britain and Political Violence in Ireland: Government and Resistance since 1848.
GOR001532874
9780198204275
0198204272
The Oxford Illustrated History of Modern War by Charles Townshend
Charles Townshend
Used - Very Good
Hardback
Oxford University Press
1997-03-13
366
N/A
Book picture is for illustrative purposes only, actual binding, cover or edition may vary.
This is a used book - there is no escaping the fact it has been read by someone else and it will show signs of wear and previous use. Overall we expect it to be in very good condition, but if you are not entirely satisfied please get in touch with us
Trustpilot