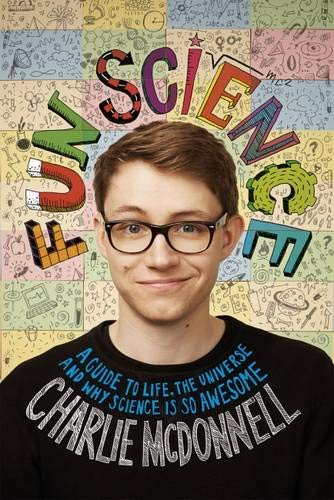 Fun Science: A Guide to Life, the Universe, and Why Science is so Awesome by Charlie McDonnell

Welcome, fellow humans (and others), to the the world of FUN SCIENCE! I'm Charlie, also known across the internet as charlieissocoollike.
In my book, I take you on an awesome journey through the cosmos, beginning with the Big Bang through to the Solar System and the origins
of life on Earth, all the way down to the particles that make up everything around us (including you and me!).
Expect frequent digressions, tons of illustrations of not-so-sciencey things (NB a microwave flying through space), and pages packed with my all time favourite mind-bending science facts.
So, get ready for a faster-than-the-speed of-light (OK, not quite) tour of all of the best and most interesting things that science has to offer us... and most importantly: WELCOME TO THE UNIVERSE!
(Written by a science fan NOT a scientist!)

"it's easy to be carried along by the jokes only to real-ize several pages in that you're learning a ton. A science lover will like this, but a lot of readers will become science lov-ers after starting here." - BookPage

Charlie McDonnell is a Vlogger, Filmmaker and Musician from Bath, who resides in London. Charlieissocoollike currently has 2.3m YouTube subscribers and 670k followers on Twitter, 208k on Instagram and 310k on Facebook. Charlie, who started posting YouTube videos in 2007, became the first Video Blogger in the UK to reach one million YouTube subscribers. Beyond his own channel, Charlie has worked on many online video projects, notably "Science of Attraction," hosted by Derren Brown, and a vlog series from behind the scenes of Doctor Who for the BBC. He's also worked with many brands to produce videos for his own channel, including Microsoft, Pixar and Disney and is a regular participant in Radio 1's Internet Takeover show. In his spare time, he enjoys hanging out with his girlfriend and their cat, Gideon.

GOR007875348
Fun Science: A Guide to Life, the Universe, and Why Science is so Awesome by Charlie McDonnell
Charlie McDonnell
Used - Very Good
Hardback
Quadrille Publishing Ltd
2016-10-20
256
1849498024
9781849498029
N/A
Book picture is for illustrative purposes only, actual binding, cover or edition may vary.
This is a used book - there is no escaping the fact it has been read by someone else and it will show signs of wear and previous use. Overall we expect it to be in very good condition, but if you are not entirely satisfied please get in touch with us.