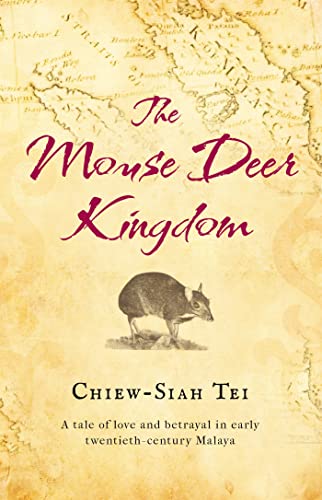 Used Price
$15.99
inc. GST
Free Shipping in Australia
A tale of love and betrayal against the backdrop of a troubled time from the author of Little Hut of Leaping Fishes.
Good

The year is 1905 and Chai Mingzhi, an immigrant newly arrived in the port-town of Malacca, takes Engi, an indigenous boy from the tropical forest, to live with him. Trapped in a realm he doesn't recognize and finding himself caught up in Chai Mingzhi's bitter personal affairs, Engi quickly learns to take on the shape of the legendary mouse deer in order to survive in the outside world. Twenty years later, Engi sets out to unravel the mystery surrounding Chai's past, his tireless quest for the land where the grand Minang Villa is built, and the tragedy that destroyed him.

The Mouse Deer Kingdom is a tale of love and betrayal against the backdrop of a troubled time when hundreds of thousands of Chinese fled poverty and the Qing Empire for Southeast Asia, where their arrival unsettled native life in their new home.

`Chiew-Siah Tei is a master storyteller, and a rare talent, with that magical ability of being able to weave a spell over her readers, with riveting plots and prose that glows with life' Time Out
A deep and affecting exploration of assimilation and displacement, migration and adaptation . . . Chiew-Siah Tei's understanding of disgrace, ruin and ambition, human cruelty, homesickness, heartache and the illusion of happiness, along with her grasp of the nature of commerce, greed, prejudice and hate, make this a heartfelt story * Asian Review of Books *
It's an extraordinary story, little known if at all in this country - but what enchanted me is that it's primarily such a highly sophisticated storyteller's book. It draws on ancient folk-tales from the Malaysian forest - and on the history of Chinese commercial emigration at the start of the twentieth century - cross-cutting between them to turn our conventional notions of colonial expansion and exploitation inside out and upside down. I found it hard to put down. -- Hilary Spurling
'[A] skilful tale of love, betrayal, and making a fresh start . . . a story full of complexity and intelligence . . . [a] rewarding and important novel' Scotsman
'Tei excels in a series of wonderfully vivid setpieces, including an account of a typhoon that reaches a Conradian pitch of intensity' Independent
'This is a beautiful little book, to be sure; a tragic family saga along the lines of Kate Atkinson's Life After Life about outsiders in a land that seems set on smiting them' Tor.com

Chiew-Siah Tei was born and raised in southern Malaysia. She came to the UK to study in the 1990s, and now lives in Glasgow. Her first novel, Little Hut of Leaping Fishes, was listed for the Man Asian Literary Prize 2007 and Best Scottish Fiction Prize 2008, and won Readers' Choice Award in Malaysia.

GOR005747801
The Mouse Deer Kingdom by Chiew-Siah Tei
Chiew-Siah Tei
Used - Good
Paperback
Pan Macmillan
2013-10-10
384
0330454439
9780330454438
N/A
Book picture is for illustrative purposes only, actual binding, cover or edition may vary.
This is a used book - there is no escaping the fact it has been read by someone else and it will show signs of wear and previous use. Overall we expect it to be in very good condition, but if you are not entirely satisfied please get in touch with us.