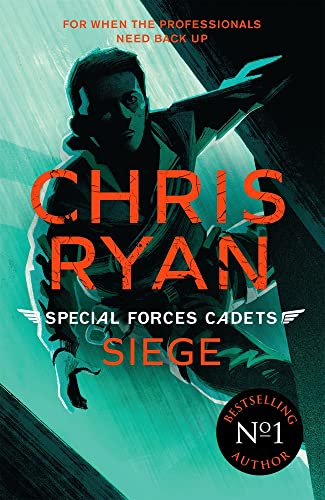 Used Price
$20.49
inc. GST
Free Shipping in Australia
Jack will require all his skills just to stay alive as a Special Forces Cadet... A top-secret government programme needs a crack team of undercover military operators. Which is what happens when Jack Silver, Lukas Channing, Abby Asher and Sami Hakim are sent into an armed siege in an inner-city school .
Like New Very Good Good

From the bestselling author of STRIKE BACK, Chris Ryan returns with a new action-packed series. Tough enough? Smart enough? Max will require all his skills just to stay alive as a Special Forces Cadet... A top-secret government programme needs a crack team of undercover military operators. They must have awesome levels of determination, endurance and fitness. They must be able to think on their feet. The recruits undergo the most rigorous and testing selection process the modern military can devise. And in order to operate in circumstances where adult forces would be compromised, the recruits must be under sixteen. Only a few are tough enough and smart enough to make it . . . And once out in the field, they will require all their skills just to stay alive. Which is what happens when Max Silver, Abby Asher, Lukas Channing and Sami Hakim are sent into an armed siege in an inner-city school . . .

A really gripping page-turner * MiniTravellers.co.uk *
Action-packed and exciting ... nail biting narrative ... this book will get young people reading * The School Librarian journal *
Right from the opening sentence, this grips ... Utterly terrifying and totally captivating, this is a credible Chris Ryan classic. * Carousel magazine *

Chris Ryan was born in Newcastle. In 1984 he joined 22 SAS. After completing the year-long Alpine Guides Course, he was the troop guide for B Squadron Mountain Troop. He completed three tours with the anti-terrorist team, serving as an assaulter, sniper and finally Sniper Team Commander. Chris was part of the SAS eight-man team chosen for the famous Bravo Two Zero mission during the 1991 Gulf War. He was the only member of the unit to escape from Iraq, where three of his colleagues were killed and four captured, for which he was awarded the Military Medal. Chris wrote about his experiences in his book The One That Got Away, which became an immediate bestseller. Since then he has written over fifty books and presented a number of very successful TV programmes.