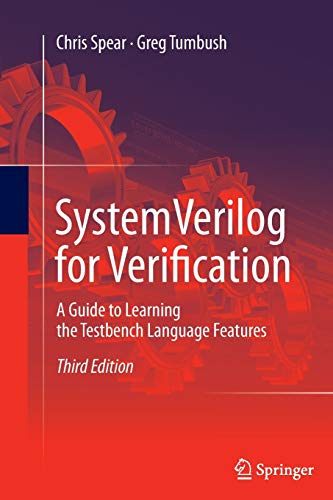 SystemVerilog for Verification by Chris Spear

Solutions Manual for end of chapter problem being prepared by authors

SystemVerilog for Verification: A Guide to Learning the Testbench Language Features by Chris Spear

Based on the highly successful second edition, this extended edition of SystemVerilog for Verification: A Guide to Learning the Testbench Language Features teaches all verification features of the SystemVerilog language, providing hundreds of examples to clearly explain the concepts and basic fundamentals. It contains materials for both the full-time verification engineer and the student learning this valuable skill.

In the third edition, authors Chris Spear and Greg Tumbush start with how to verify a design, and then use that context to demonstrate the language features, including the advantages and disadvantages of different styles, allowing readers to choose between alternatives. This textbook contains end-of-chapter exercises designed to enhance students' understanding of the material. Other features of this revision include:

SystemVerilog for Verification: A Guide to Learning the Testbench Language Features, Third Edition is suitable for use in a one-semester SystemVerilog course on SystemVerilog at the undergraduate or graduate level. Many of the improvements to this new edition were compiled through feedback provided from hundreds of readers.

Chris Spear has been working in the ASIC design and verification field for 30 years. He started his career with Digital Equipment Corporation (DEC) as a / CAD Engineer on DECsim, connecting the first Zycad box ever sold, and then a hardware Verification engineer for the VAX 8600, and a hardware behavioral simulation accelerator. He then moved on to Cadence where he was an Application Engineer for Verilog-XL, followed by a stint at Viewlogic. Chris is currently employed at Synopsys Inc. as a Verification Consultant, a title he created a dozen years ago. He has authored the first and second editions of SystemVerilog for Verification: A Guide to Learning the Testbench Language Features. Chris earned a BSEE from Cornell University in 1981. In his spare time, Chris enjoys road biking in the mountains and traveling with his wife.

Greg Tumbush has been designing and verifying ASICs and FPGAs for 13 years. After working as a researcher in the Air Force Research Labs (AFRL) he moved to beautiful Colorado to work with Astek Corp as a Lead ASIC Design Engineer. He then began a 6 year career with Starkey Labs, AMI Semiconductor, and ON Semiconductor where he was an early adopter of SystemC and SystemVerilog. In 2008, Greg left ON Semiconductor to form Tumbush Enterprises, LLC where he has been consulting clients in the areas of design, verification, and backend to ensure first pass success. He is also a part time Instructor at the University of Colorado, Colorado Springs where he teaches senior and graduate level digital design and verification courses. He has numerous publications which can be viewed at www.tumbush.com. Greg earned a Ph.D. from the University of Cincinnati in 1998.

Verification Guidelines.- Data Types.- Procedural Statements and Routines.- Connecting the Testbench and Design.- Basic OOP.- Randomization.- Threads and Interprocess Communication.- Advanced OOP and Testbench Guidelines.- Functional Coverage.- Advanced Interfaces.- A Complete SystemVerilog Testbench.- Interfacing with C/C++.
NLS9781489995001
9781489995001
1489995005
SystemVerilog for Verification: A Guide to Learning the Testbench Language Features by Chris Spear
Chris Spear
New
Paperback
Springer-Verlag New York Inc.
2014-04-13
464
N/A
Book picture is for illustrative purposes only, actual binding, cover or edition may vary.
This is a new book - be the first to read this copy. With untouched pages and a perfect binding, your brand new copy is ready to be opened for the first time
Trustpilot