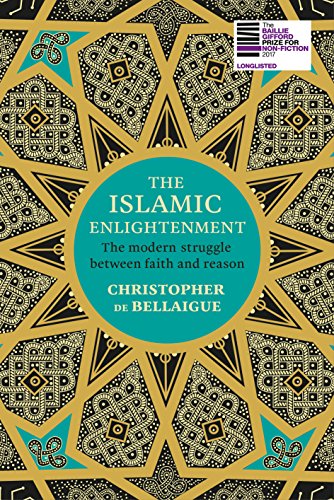 Used Price
$24.49
inc. GST
Free Shipping in Australia
The Muslim world has often been accused of a failure to modernise, reform and adapt. Beginning with the dramatic collision of East and West following Napoleon's arrival in Egypt, and taking us through 200 years of Middle Eastern history, the author introduces us to key figures and reformers who transformed Ottoman Turkey's language and literature.
Reviews:
Trustpilot
Very Good

The Islamic Enlightenment: The Modern Struggle Between Faith and Reason by Christopher de Bellaigue

SHORTLISTED FOR THE BAILLIE GIFFORD PRIZE Selected as a book of the year 2017 by the Times Literary Supplement and the Sunday Times ('At a time when the gulf between Islam and the West yawns distressingly wide, De Bellaigue's book is a welcome and surprising corrective' Dominic Sandbrook, Sunday Times) 'The best sort of book for our disordered days: timely, urgent and illuminating' Pankaj Mishra 'It strikes a blow ... for common humanity.' Sunday Times The Islamic Enlightenment: a contradiction in terms? The Muslim world has often been accused of a failure to modernise, reform and adapt. But, from the beginning of the nineteenth century to the present day, Islamic society in its Middle Eastern heartlands has in fact been transformed by modern ideals and practices, including the adoption of modern medicine, the emergence of women from purdah and the development of democracy. Who were the scholars and scientists, writers and politicians that brought about these remarkable changes? And why is their legacy now under threat? Beginning with the dramatic collision of East and West following Napoleon's arrival in Egypt, and taking us through 200 tumultuous years of Middle Eastern history, Christopher de Bellaigue, introduces us to key figures and reformers; from Egypt's visionary ruler Muhammad Ali to brave radicals like Iran's first feminist Qurrat al-Ayn and the writer Ibrahim Sinasi, who transformed Ottoman Turkey's language and literature. This book tells the forgotten story of the Islamic Enlightenment. It shows us how to look beyond sensationalist headlines to foster a genuine understanding of modern Islam and Muslim culture, and is essential reading for anyone engaged with the state of the world today.

"An eye-opening, well-written and very timely book, which can help us understand better the complex relationship between the Muslim world and modernity. While both Islamic extremists and Western bigots find it convenient to stress the incompatibility of Islam and modernity, Christopher de Bellaigue shows that Islam is whatever Muslims make of it, and that at least some Muslims have made of it something very modern." -- YUVAL NOAH HARARI author of SAPIENS and HOMO DEUS
"This book is an enlightenment in itself, and a salient one in this age when everyone seems to feel entitled to a firm opinion about Islam and Muslims." -- David Aaronovitch * The Times *
"A highly original and informative survey of the clashes between Islam and modernity in Istanbul, Cairo and Tehran in the last two hundred years. Brilliant." -- Orhan Pamuk
"Christopher de Bellaigue has long been one of our most resourceful and stimulating interpreters of realities veiled by fear and prejudice. In The Islamic Enlightenment, he cuts through the complacent opposition of Islam-versus-modernity to reveal a fascinating world: one in which complex human beings constantly change, improvise and adjust under the pressures of history. It is the best sort of book for our disordered days: timely, urgent and illuminating." -- Pankaj Mishra
"This is a nuanced and empathetic view of the Islamic world at one of its most challenging and enthralling moments: its history-changing encounter with western modernity... At a time of profound suspicion and mistrust between the West and the Muslim world, this is an important, beautifully written book that offers a powerful corrective to the notion that Islam contains an inbuilt prejudice against modernity. It strikes a blow, as the most readable writers do, for common humanity." -- Justin Marozzi * Sunday Times *

Christopher de Bellaigue was born in London in 1971, and was educated at Cambridge University, where he read Iranian and Indian Studies. Between 1995 and 2007, he lived and worked as a journalist in south Asia and the Middle East, writing for The Economist, Guardian and the New York Review of Books. He is the award-winning author of four books and has made several BBC television and radio programmes. He lives in London.

GOR008217641
The Islamic Enlightenment: The Modern Struggle Between Faith and Reason by Christopher de Bellaigue
Christopher de Bellaigue
Used - Very Good
Paperback
Vintage Publishing
2017-02-23
432
1847922422
9781847922427
Short-listed for Baillie Gifford Prize for Non-Fiction 2017 (UK) Short-listed for Orwell Prize 2018 (UK) Long-listed for Cundill Prize for Historical Literature 2017 (UK)
Book picture is for illustrative purposes only, actual binding, cover or edition may vary.
This is a used book - there is no escaping the fact it has been read by someone else and it will show signs of wear and previous use. Overall we expect it to be in very good condition, but if you are not entirely satisfied please get in touch with us.