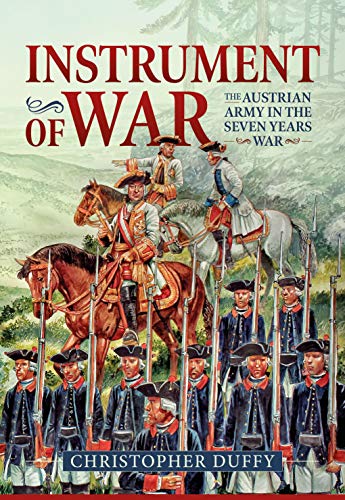 Instrument of War by Christopher Duffy

This book is the most important examination of an 18th Century army yet done, written by the premier military historian of the era.

Instrument of War: The Austrian Army in the Seven Years War Volume 1 by Christopher Duffy

How did an 18th Century army work? This book is the most important examination of such an army yet done, written by the premier military historian of the era. Maria Theresa had seen her inheritance almost lost to unprovoked attacks from her neighbours. Her army had stood by her then, and was now trying desperately to improve, as it had to face Frederick the Great, the master-soldier of the era. But she and her ministers soon faced the dilemma of how to fight a war without sacrificing what they were fighting for. The structure of the army, the life of its soldiers, its strengths and weaknesses, the personalities that gave it such a unique character, from top to bottom, are all considered. Not only is the Austria of Maria Theresa examined, but fascinating views appear of Prussian opponents and French, Swedish and Russian armies. Efforts were made to reshape the army, the state, and the world of diplomacy. Maria Theresa wanted to be a mother to her army, to serve it as faithfully as it served her. This is a study of what problems they faced. The army and its needs affected all around it. Conscription, taxation, constitutional change, bureaucracy, logistics, all of these dominated countries that never witnessed a campaign. To most of the inhabitants of Central Europe the army was the state, and their lives cannot be understood without examining it. Conscription tells us much about the homelands of the soldiers - the languages they spoke, the professions they served, their willingness to serve what to many was an alien monarch. The army provides an important view of 18th Century Bohemia, Hungary, Croatia, Lombardy, Belgium and Austria. Even the distant Irish played an important role in this army. But this is no dry commentary. The 18th Century is brought to life not only in the words of Christopher Duffy, but also of the perceptive diplomat Kaunitz, experienced generals like Daun and Loudon, Prussian spies and foreign attaches, a cynical Belgian prince and a young Italian officer, and many others. Their first-hand accounts explain the successes and failures of Austria at war. The battles and campaigns of the Seven Years War cannot be understood without knowledge of the instruments necessary to conduct such a war. Every serious military historian should read this book.
Any wargamer with more than a casual interest in the Austrian Army of the mid-eighteenth century should definitely purchase and treasure this superb book, which seems certain to be the definitive work on the subject for the foreseeable future. [...] I cannot recommend it too highly. * Miniature Wargames - Arthur Harman *
Must be considered definitive, or at least essential reading for anyone interested in the period and as a guide to writing solid history....superior book. 10/10. * Wargames Illustrated *
Christopher Duffy is the 'acclaimed and highly-regarded doyen of eighteenth-century military history' (The Herald). His works are grounded on unpublished sources and physical realities, and are characterised by the attention that is given to the visual presentation - and not least the maps, which he draws himself. Dr Duffy was born in 1936. He was a contemporary and friend of John Keegan at Balliol College, Oxford - gaining a first-class degree in Modern History in 1958 and his doctorate in 1961. In that year he joined the Department of Military History at the Royal Military Academy Sandhurst, and retired from there in 1996 as Senior Lecturer in War Studies. After a research professorship at De Monfort University (1996-2001), he became involved in a variety of voluntary work - taking in historical advice and fundraising for the National Trust for Scotland's centre at Culloden. As such, he is heavily engaged in the effort to save this and other 'Jacobite' battlefields from the threat of development, which has now become acute. He was a founder member of the British Commission for Military History and the Scottish Battlefields Trust, and is currently a Vice-President of the Military History Society of Ireland and Chairman of the 1745 Association.
NGR9781912390960
9781912390960
1912390965
Instrument of War: The Austrian Army in the Seven Years War Volume 1 by Christopher Duffy
Christopher Duffy
New
Hardback
Helion & Company
2020-03-15
608
N/A
Book picture is for illustrative purposes only, actual binding, cover or edition may vary.
This is a new book - be the first to read this copy. With untouched pages and a perfect binding, your brand new copy is ready to be opened for the first time
Trustpilot