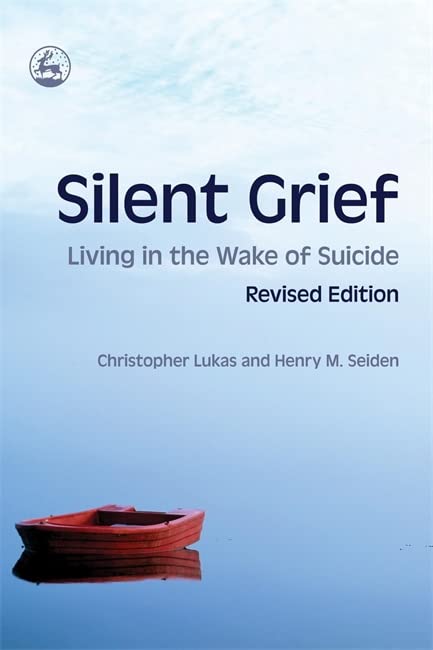 Used Price
$26.99
inc. GST
Free Shipping in Australia
Silent Grief is a book for and about "suicide survivors" - those who have been left behind by the suicide of a friend or loved one. Written by a suicide survivor, this book gives valuable insights into living in the wake of suicide, providing useful strategies and support for those affected by suicide, as well as professionals working with them.
Reviews:
Trustpilot
Very Good

Silent Grief: Living in the Wake of Suicide by Christopher Lukas

This book gives insights into the pain and suffering involved when people are grieving for someone who has committed suicide, but it also offers hope without diminishing the significance of the suffering involved. As such, it has a lot to offer, and is therefore to be welcomed.'

'This book provides deep and valuable insight into the experiences of "suicide survivors" - those who have been left behind by the suicide of friend, family member or loved one.'

'The personal stories are full of pathos interest and will clarify where the death leaves those left behind. The list of self-help groups is world wide and it will be useful that you can point the bereaved and traumatized in the right direction.'

'The authors describe powerfully the effect of suicide on survivors and the world of silence, shame, guilt and depression that can follow. Author Christopher Lake is a suicide survivor and co-author Henry Seiden is an experienced therapist and educator.

They use sensitive and unambiguous language to provide an understanding of what it is like to live in the wake of suicide and the struggle to make sense of the world. They also look at how survivors might actively respond to their situation, rather than being passive victims. This book should be read by any professional who is likely to come into contact with people affected by suicide.'

'The book is well written and relevant to both survivors and professionals concerned for the welfare of those bereaved by suicide.'

'Silent grief is a book for and about "suicide survivors," defined as people who have experienced the death of a friend or relative through suicide, and for anyone who wants to understand what survivors go through. The book explains the profound, traumatic effect suicide has on individuals bereaved in such circumstances. Using verbatim quotes from survivors it explains how they experience feelings of shame, guilt, anger, doubt, isolation and depression. This book provides good insight into the experience of individuals affected by suicide and can be a useful resource to anybody working with such people - be it prisoners who have lost someone close through suicide or the family of a prisoner following a self-inflicted death in prison.

Silent Grief is a book for and about "suicide survivors" - those who have been left behind by the suicide of a friend or loved one.

Author Christopher Lukas is a suicide survivor himself - several members of his family have taken their own lives - and the book draws on his own experiences, as well as those of numerous other suicide survivors. These inspiring personal testimonies are combined with the professional expertise of Dr. Henry M. Seiden, a psychologist and psychoanalytic psychotherapist.

The authors present information on common experiences of bereavement, grief reactions and various ways of coping. Their message is that it is important to share one's experience of "survival" with others and they encourage survivors to overcome the perceived stigma or shame associated with suicide and to seek support from self-help groups, psychotherapy, family therapy, Internet support forums or simply a friend or family member who will listen.

This revised edition has been fully updated and describes new forms of support including Internet forums, as well as addressing changing societal attitudes to suicide and an increased willingness to discuss suicide publicly.

Silent Grief gives valuable insights into living in the wake of suicide and provides useful strategies and support for those affected by a suicide, as well as professionals in the field of psychology, social work, and medicine.

Christopher Lukas is a 45-year veteran of the public television world in the US, a writer and television producer whose documentaries include films on end-of-life care, psychology, and the arts.

Dr. Henry M. Seiden was a psychologist and psychoanalytic psychotherapist, living and practicing in New York. He taught and supervised in a number of graduate schools, clinics, hospitals, and training institutes in New York City.

Preface to the Revised Edition. Part One: The Short Term: "What's Happening to Me?" Introduction: Lukas's Story. 1. What Happens to the Survivor After Someone Commits Suicide. 2. Emotional Reactions to Suicide. 3. A Family's Story. Part Two: The Long Run: "What's Going to Happen to Me?" 4. The Bargain: A Deal We Make with Life. 5. Bargains: The Long Good-bye. 6. Bargains: Scapegoating. 7. Bargains: "I Am Guilty; I Am a Victim." 8. Bargains: Cutting Off. 9. Bargains: A Miscellany. 10. The Saddest Bargain: "Because You Died, I'll Die." 11. The Grand Bargain: Silence. 12. Reactions to an Adolescent's Suicide. Part Three: Giving Help and Getting Help: Listening and Talking. 13. Responding. 14. Giving Help by Listening. 15. Getting Help by Talking. 16. Talking with Children. 17. Living with Suicide: Some Stories About Responding. Epilogue: Lukas's Story: A Personal Summary. Notes. Appendix: Where to Find Self-Help Groups. Bibliography. Index.

GOR003423478
Silent Grief: Living in the Wake of Suicide by Christopher Lukas
Christopher Lukas
Used - Very Good
Paperback
Jessica Kingsley Publishers
2007-04-15
224
184310847X
9781843108474
N/A
Book picture is for illustrative purposes only, actual binding, cover or edition may vary.
This is a used book - there is no escaping the fact it has been read by someone else and it will show signs of wear and previous use. Overall we expect it to be in very good condition, but if you are not entirely satisfied please get in touch with us.