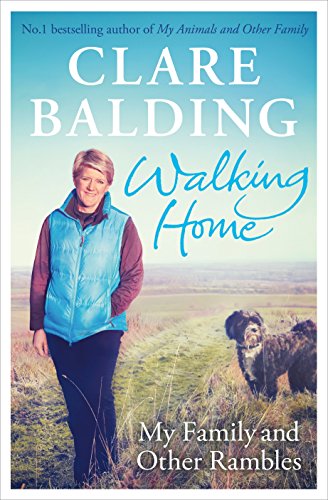 In Stock
$19.99
inc. GST
From the delights of the North East Coastal Path to the Highland Way, from Milngavie to the South Downs, this book walks through apocalyptic thunderstorms, stripped off in bus stops, battled with blisters, and traipsed through snow-capped mountains with no voice.
Good
Only 1 left

Walking Home: My Family and Other Rambles by Clare Balding

I am at home with my brother Andrew banging on about the joys of walking. Suddenly he says, 'You should do the Wayfarer's Walk. We always talked about it, do you remember?'

So I start thinking about it seriously. It is 71 miles in total. It will be a great family adventure.

Now she wants her family to share some of that pleasure. Her and her brother Andrew are determined to conquer the Wayfarer's Walk, a route which runs past their family stables Kingsclere. What could possibly go wrong?

This is a story of paths and people, of discovering the glories of Britain and Ireland, and of (mis)adventures with the family. Along the way there are charming diversions and life-changing rambles, including her take on the 2012 Olympics. And, finally, this is Clare's story of Walking Home . . .

Clare Balding's first book, My Animals and Other Family, was a runaway number one bestseller and won Autobiography of the Year at the 2012 Specsavers National Book Awards. Clare broadcasts on TV and radio for the BBC, Channel 4 and BT Sport. In 2013 she received an OBE for services to broadcasting and journalism. She lives in West London with her partner Alice, their wayward Tibetan Terrier Archie and a cat who couldn't give a damn called Itty.

Praise for My Animals and Other Family:

Brilliant, magical, unmissable * Daily Mail *
Who needs politicians agonising about national and regional identities? Clare Balding has effortlessly encapsulated all we love best about Britain * Telegraph *
Clare Balding would be the ideal surrogate sister or auntie. The joy of this book is Balding's sheer rapture for life, movement and never shutting up about it * The Times *
Balding has won over the literary world with her two volumes of autobiography * Evening Standard *
Even the most reluctant of walkers will be tempted to don wellies after reading Clare's wonderful descriptions... effortless charm * Express *

Clare Balding's first book, My Animals and Other Family, was a runaway number one bestseller and won Autobiography of the Year at the 2012 Specsavers National Book Awards. Clare was lead presenter for the London 2012 Olympic and Paralympic Games, which she won a BAFTA Special Award. She has presented horse racing on television and radio for 20 years, winning RTS Sports Presenter of the Year and Racing Broadcaster of the Year (twice).

GOR006926772
Walking Home: My Family and Other Rambles by Clare Balding
Clare Balding
Used - Good
Paperback
Penguin Books Ltd
2014-09-11
304
0241184258
9780241184257
N/A
Book picture is for illustrative purposes only, actual binding, cover or edition may vary.
The book has been read but remains in clean condition. All pages are intact and the cover is intact. Some minor wear to the spine.