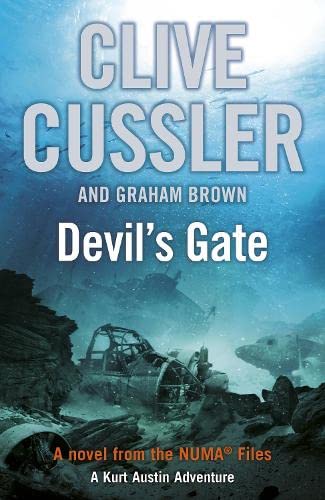 When Kurt Austin and the NUMA team set out to rescue a Japanese cargo ship from a gang of ruthless pirates they are immediately plunged into a mystery. For after the pirates scuttle the ship they fought so hard to take, their own corsair suddenly bursts into flames mid-getaway.

Clive Cussler, author of the best-selling Dirk Pitt novels Crescent Dawn and Treasure of Khan, and co-author Paul Kemprecos place their hero, Kurt Austin, at the centre of a tangled web of conspiracy and ambition in Devil's Gate, the ninth novel of the action-packed NUMA Files series.

Deep beneath the Eastern Atlantic Ocean lies an extraordinary underwater burial ground of ships and planes . . .

When Kurt Austin and the NUMA team set out to rescue a Japanese cargo ship from a gang of ruthless pirates they are immediately plunged into a mystery. For after the pirates scuttle the ship they fought so hard to take, their own corsair suddenly bursts into flames mid-getaway.

As Austin and the team investigate this curious turn of events, they uncover a scheme involving the deadly ambitions of an African dictator, the creation of a weapon of terrible power, a kidnapped CERN scientist and a deep-water graveyard holding a lost aircraft and its precious cargo.

As a terrifying and audacious plan to bring the world's major nations to their knees is set in motion, only Kurt Austin - the right man, in the right place, at the right time - can stop it . . .

Bestselling author Clive Cussler has kept millions of readers hooked with adventures at sea, exotic locations, cutting-edge science and page-turning pace for four decades. As well as the NUMA Files series there are also the Oregon Files, the Dirk Pitt stories (which started it all), the Isaac Bell adventures and the Fargo series. The other titles in the NUMA files series are: Serpent, Blue Gold, Fire Ice, White Death, Lost City, Polar Shift, The Navigator, Medusa and The Storm.

Clive Cussler is the author and co-author of a great number of international bestsellers, including the famous Dirk Pitt (R) adventures, such as Havana Storm; the NUMA (R) Files adventures, most recently The Rising Sea; the Oregon Files, such as Typhoon Fury; the Isaac Bell historical thrillers, which began with The Chase; and the recent Fargo Adventures which lastly included The Gray Ghost. He lives in Arizona. Graham Brown is the author of Black Rain and Black Sun, and the co-author with Cussler of Devil's Gate, The Storm, Zero Hour, Ghost Ship, The Pharaoh's Secret, Nighthawk and The Rising Sea. A pilot and an attorney, he lives in Arizona.
GOR003494001
9780718156459
0718156455
Devil's Gate: NUMA Files #9 by Clive Cussler
Clive Cussler
The NUMA Files
Used - Very Good
Hardback
Penguin Books Ltd
2012-01-05
480
N/A
Book picture is for illustrative purposes only, actual binding, cover or edition may vary.
This is a used book - there is no escaping the fact it has been read by someone else and it will show signs of wear and previous use. Overall we expect it to be in very good condition, but if you are not entirely satisfied please get in touch with us
Trustpilot