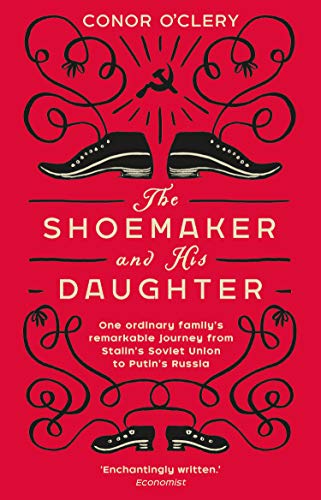 The Shoemaker and his Daughter by Conor O'Clery

The Shoemaker and His Daughter is an epic story spanning the Second World War to the fall of the Soviet Union, taking in eighty years of Soviet and Russian history, from Stalin to Putin.

The Shoemaker and his Daughter by Conor O'Clery

'O'Clery takes us into the hidden heart of Soviet Russia... An arresting and evocative story.' Keggie Carew, author of Dadland

The Soviet Union, 1962. Gifted shoemaker Stanislav Suvorov is imprisoned for five years. His crime? Selling his car for a profit. On his release, social shame drives him and his family into voluntary exile in Siberia, 5,000 kilometres from home. In a climate that's unfriendly both geographically and politically, it's their chance to start again.

The Shoemaker and His Daughter is an epic story spanning the Second World War to the fall of the Soviet Union, taking in eighty years of Soviet and Russian history, from Stalin to Putin. Following the footsteps of a remarkable family Conor O'Clery knows well - he is married to the shoemaker's daughter - it's both a compelling insight into life in a secretive world at a siesmic moment in time and a powerful tale of ordinary lives shaped by extraordinary times.

Conor O'Clery is a legend among foreign correspondents. Over four decades - in Russia, the Middle East, Africa and Asia - he has established himself as a voice of wit, close observation, and sane good sense. His new book will be welcomed by everyone who cares about good writing, and about the human stories that enable us to understand the great movements of world history. * Richard Lloyd Parry, author of Ghosts of the Tsunami *
Conor O'Clery's latest book is a tour de force - a sweeping account of the turbulent decades of the Soviet Union and the new Russia, told through the prism of a Russian-Armenian family. The story features love, politics, murder, wars, and the fracturing of ties, personal and ethnic, brought about by Stalin and his Kremlin successors. O'Clery is a gifted writer. His subject is one he knows well: his wife's father, mother and relatives, as they make their own sure-footed journey through a treacherous twentieth century. * Luke Harding, #1 New York Times bestselling author of Collusion: How Russia Helped Trump Win the White House *
Highly readable, deeply informed telling of an ordinary, extraordinary story. * Sunday Times *
Takes us into the hidden heart of Soviet Russia... an illuminating combination of history, politics, geography and humanity that's personal and close... An arresting and evocative story, brought alive through a host of characters, not least, the vast, hostile, secretive Russia herself. * Keggie Carew, author of Dadland *
Transcends the confines of a mere family history... With his easy humour, engaging style and innate sympathy for the little guy, O'Clery shows how events and decisions in Moscow affected millions of Russians in myriad life-changing ways. * Financial Times *
Conor O'Clery holds a unique perspective on the former Soviet Union, as resident Irish Times correspondent during the last four years of communism and as a frequent visitor since then, having married into a Russian-Armenian family in Krasnoyarsk. After Moscow he was a foreign correspondent in Washington, Beijing and New York. He has been twice awarded Journalist of the Year, for his dispatches from Moscow and for his reporting of the 9/11 attacks in New York. He is the author of several books including Melting Snow, on the fall of the Soviet Union; The Greening of the White House, about the Clinton presidency, The Billionaire Who Wasn't, a biography of the philanthropist Chuck Feeney; and Moscow, December 25, 1991, an account of the last day of the Soviet Union.
GOR009924357
9781784163112
1784163112
The Shoemaker and his Daughter by Conor O'Clery
Conor O'Clery
Used - Like New
Paperback
Transworld Publishers Ltd
2019-03-14
384
N/A
Book picture is for illustrative purposes only, actual binding, cover or edition may vary.
The book has been read, but looks new. The book cover has no visible wear, and the dust jacket is included if applicable. No missing or damaged pages, no tears, possible very minimal creasing, no underlining or highlighting of text, and no writing in the margins
Trustpilot