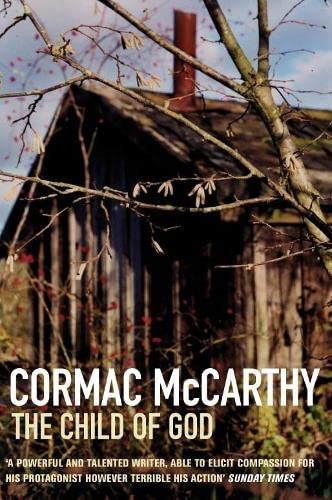 Child of God
by Cormac McCarthy

In Stock
$10.99
+10% GST
A novel that examines the darkest shades of human experience with dignity and grace
Very Good Good Well Read
Only 3 left

Child of God by Cormac McCarthy

By the author of the critically acclaimed Border Trilogy, Child of God is a taut, chilling novel that plumbs the depths of human degradation. Lester Ballard, a violent, solitary and introverted young backwoodsman dispossessed on his ancestral land, is released from jail and allowed to haunt the hill country of East Tennessee, preying on the population with his strange lusts. McCarthy transforms commonplace brushes with humanity - in homesteads, stores and in the woods - into stunning scenes of the comic and the grotesque, and as the story hurtles toward its unforgettable conclusion, depicts the most sordid aspects of life with dignity, humour, and characteristic lyrical brilliance.

`Demands its reader's attention from the opening sentence' Newsweek

`A reading experience so impressive, so `new', so clearly well made that it seems almost to defy the easy aesthetic categories . . . Accomplished in rare, spare, precise yet poetic prose' New Republic

'His prose, unfailingly beautiful and exact, carries us into a dreamworld of astonishing and violent revelation. It is a frightening, entrancing world, which we must finally recognize as our own' Tobias Wolff

'McCarthy is a powerful and talented writer, able to elicit compassion for his protagonist however terrible his action' Sunday Times

GOR001408132
Child of God by Cormac McCarthy
Cormac McCarthy
Used - Very Good
Paperback
Pan Macmillan
1989-03-10
208
033030643X
9780330306430
N/A
Book picture is for illustrative purposes only, actual binding, cover or edition may vary.
This is a used book - there is no escaping the fact it has been read by someone else and it will show signs of wear and previous use. Overall we expect it to be in very good condition, but if you are not entirely satisfied please get in touch with us.