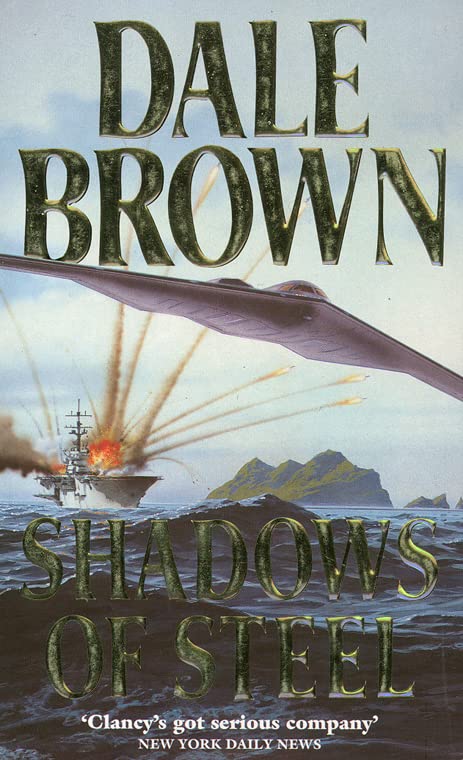 Shadows of Steel
by Dale Brown

The new novel of breathtaking action and adventure in the skies from the bestselling author of Storming Heaven and Flight of the Old Dog.

Shadows of Steel by Dale Brown

The new novel of breathtaking action and adventure in the skies from the bestselling author of Storming Heaven and Flight of the Old Dog.

The spectacular flying scenes, technological detail and astonishing authenticity of international bestsellers such as Flight of the Old Dog, Chains of Command and Storming Heaven have won ex-pilot Dale Brown a place at the leading edge of modern military thriller writing.

Now, in his first novel for two years, he brings back one of his most popular characters, Patrick McLanahan, at the controls of his state-of-the-art B-2 stealth bomber - in a heart-stopping tale of contemporary conflict. With Iran throwing its weight around the Persian Gulf, his latest mission, as part of a top secret CIA flying unit, is to find Iran's key military, industrial and command centres, and destroy them: quickly, secretly, untraceably - the ultimate stealth attack.

`Like the technothrillers of Tom Clancy, Stephen Coonts and Larry Bond, the novels of Dale Brown brim with action, sophisticated weaponry and political intrigue. Far from just another technothriller, Shadows of Steel is a pulse-pounding novel of the near future.'
San Francisco Chronicle

Dale Brown is a former US Air Force captain who served as a navigator from 1978 to 1986, logging thousands of hours aboard both B-52 and FB-111 bombers.

`Brown is the best military adventure writer in the country today.'
Clive Cussler

GOR000631127
Shadows of Steel by Dale Brown
Dale Brown
Used - Very Good
Paperback
HarperCollins Publishers
1996-08-23
384
0006498469
9780006498469
N/A
Book picture is for illustrative purposes only, actual binding, cover or edition may vary.
This is a used book - there is no escaping the fact it has been read by someone else and it will show signs of wear and previous use. Overall we expect it to be in very good condition, but if you are not entirely satisfied please get in touch with us.