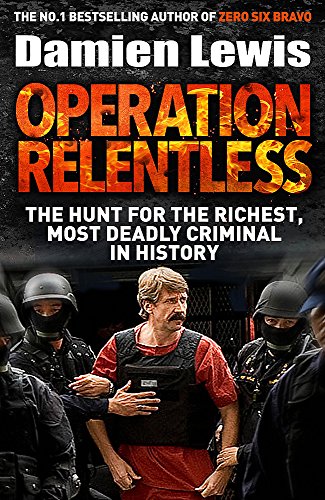 Operation Man Hunt: The Hunt for the Richest, Deadliest Criminal in History by Damien Lewis

The new bestseller from the author of Zero Six Bravo

By 2007 Viktor Bout had become the world's foremost arms dealer. Known as the 'Merchant of Death' he was both "Public Enemy No. 1" to the global intelligence agencies and a ruthless criminal worth around six billion dollars.

For years Bout had eluded capture, meanwhile building up a labyrinthine network of airlines selling weapons to order to dictators, rebels, despots and terror groups worldwide. He was hunted by the CIA, NSA, MI6, as well sought by the United Nations for being their top global sanctions buster. Holed up in Moscow - from where he ran a suite of offices selling anything from AK47s to state-of-the-art helicopter gunships and anti-aircraft missiles - he was shielded by a Russian state that was a partner in his dark dealings. In short, Bout appeared utterly invulnerable and beyond any hope of capture.

Step forward former SAS man Mike Snow. After serving in the Regiment, Snow had worked as a bush pilot in Africa, where he'd got to know Bout well. Via its own secretive, shadow network, Snow was approached by the US DEA, the Drugs Enforcement Agency. The DEA agents had one question for him: was Snow able to get to Viktor Bout?

This is the incredible tale of OPERATION RELENTLESS, the top-secret mission that Snow and a handful of DEA operatives launched to entrap Viktor Bout - a story that ranges from the steamy jungles of Colombia to the ice-bound streets of Moscow, and from horrific bloodshed and tyranny in the Congo, to a snatch operation like no other. It may read like an implausible thriller, but every word of Operation Relentless is true.

GOR008556473
Operation Man Hunt: The Hunt for the Richest, Deadliest Criminal in History by Damien Lewis
Damien Lewis
Used - Like New
Hardback
Quercus Publishing
2017-05-16
384
1848665393
9781848665392
N/A
Book picture is for illustrative purposes only, actual binding, cover or edition may vary.
The book has been read, but looks new. The book cover has no visible wear, and the dust jacket is included if applicable. No missing or damaged pages, no tears, possible very minimal creasing, no underlining or highlighting of text, and no writing in the margins.