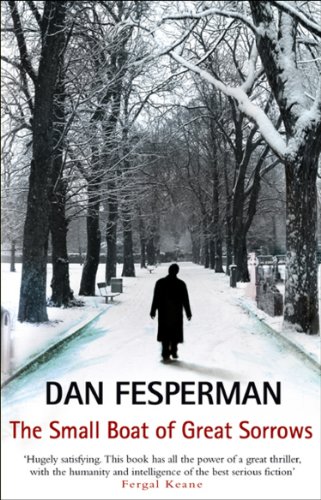 The Small Boat Of Great Sorrows
by Dan Fesperman

Out of Stock
$14.49
inc. GST
Vlado Petric, former detective in war-torn Sarajevo, has left his beloved homeland to join his wife and daughter in Germany, where he scratches a meagre living among the dust of former conflicts on the building sites of the new Berlin.
Very Good
Only 0 left

The Small Boat Of Great Sorrows by Dan Fesperman

Vlado Petric, former detective in war-torn Sarajevo, has left his beloved homeland to join his wife and daughter in Germany, where he scratches a meagre living among the dust of former conflicts on the building sites of the new Berlin. Returning home one evening, he finds an enigmatic American investigator waiting for him in the small apartment he now shares with his wife and daughter. The investigator, Calvin Pine, works for the International War Crimes Tribunal, and he tells Petric that they want him to go to The Hague. It doesn't take Petric long to accept, especially when Pine tells him they are after a big fish: one of the men who they think is responsible for the terrible massacre of Srebrenica. What Petric doesn't know is that he is also being used as bait to lure into the open a murderer from the previous generation; a man whose activities in the Second World War makes the current generation of killers look like amateurs. As Petric travels from modern-day Germany, through the ruins of Bosnia, to the peaceful hills of southern Italy where bitter, unresolved tensions still crackle beneath the surface, the stakes become all too personal. And he soon finds that investigating the mysteries of the past can be every bit as dangerous as finding his way through the war zones of the present.

"'Dan Fesperman has written that rare thing: a fine and intelligent novel that makes you think, and keeps you turning the pages'" -- Val McDermid
"'Thoroughly recommended...Has the tang of someone writing with conviction, compassion and, above all, an understanding of the Balkans'" * Observer *
"'Hugely satisfying. This book has all the power of a great thriller, with the humanity and intelligence of the best serious fiction'" -- Fergal Keane
"'Gruelling, exciting, eventful...cleanly and crisply written, with a vein of sardonic asides'" * Literary Review *

is a reporter for the Baltimore Sun and worked in its Berlin bureau during the years of civil war in former Yugoslavia, as well as in Afghanistan during the recent conflict for the paper. His first novel, Lie in the Dark, won the CWA John Creasey award for best first crime novel in 1999 and his second novel, The Small Boat of Great Sorrows, won the 2003 CWA Steel Dagger for Thriller of the Year. His new novel, The Warlord's Son is published by Bantam Press.

GOR001722169
The Small Boat Of Great Sorrows by Dan Fesperman
Dan Fesperman
Used - Very Good
Paperback
Transworld Publishers Ltd
2004-04-01
464
0552150231
9780552150231
N/A
Book picture is for illustrative purposes only, actual binding, cover or edition may vary.
This is a used book - there is no escaping the fact it has been read by someone else and it will show signs of wear and previous use. Overall we expect it to be in very good condition, but if you are not entirely satisfied please get in touch with us.