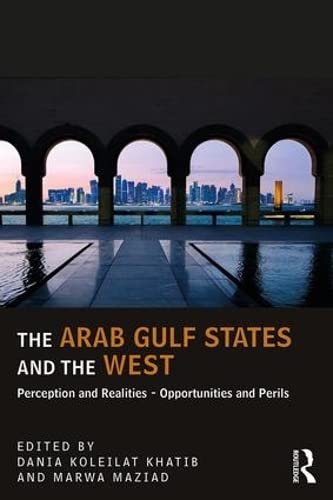 The Arab Gulf States and the West by Dania Koleilat Khatib

The Arab Gulf States and the West: Perceptions and Realities - Opportunities and Perils by Dania Koleilat Khatib

This book examines the changing image of the Arab Gulf States in the West. It addresses the question of perception in international relations and how the Arab States of the Gulf have pursued various endeavors to project themselves into Western imagination.

The book chapters generate ideas on how perceptions came about and ways to improve cultural and political realities on the ground in the Arab Gulf States. Thus, it paves the way for a new area of research in the field of Gulf Studies that extends beyond traditional international relations frameworks by weaving elements of intercultural communication into the mix. Recognizing, yet extending beyond, a traditionally realist framework, which has dominated the analysis of Arab Gulf States' foreign relations with western countries, this book tackles both the materialist and the symbolic in the efforts and initiatives launched by the Arab Gulf States. Some chapters maintain a social-scientific approach about the politics of the Arab Gulf States in the West from an international relations lens. Others employ theoretical frameworks that were founded on the notion of the "encounter," with anthropological lenses and concepts of intercultural communication. In addition to the value of this academic research agenda, as such, some of the chapters also touch upon the added importance of policy-oriented input.

As the Arab Gulf States actively engage with the West, the book would widely appeal to students and researchers of Gulf politics and international relations.

Sectin I: Evolving Perceptions and the Arab Gulf States in the US
1. It didn't JASTA be this way: the passage of the Justice Against Sponsors of Terrorism Act ( JASTA) as a failure of Arab lobbying - David des Roches
2. Arab Gulf States Lobbying in the US in the wake of the Arab Uprisings - Dania Koleilat Khatib
3. The United States and the Gulf in the age of Trump: perceptions, possibilities, and challenges - Charles Dunne

Section II: Arab Gulf States in Europe and the Non-Arab Middle East: France, the United Kingdom, Turkey, and Israel
4. The perception of the Gulf States in France: from support of terrorism to the risks to national sovereignty - Rachid Chaker
5. The public diplomacy paradox: Saudi Arabia's negative image in the UK - Najah Al-Otaibi
6. The Turkish burden: the cost of the Turkey-Qatar alliance and hard power projection into Qatar's foreign policy - Marwa Maziad
7. The continuity and change of the Gulf States' image in the Israeli epistemic community - Mohamed Youness

GOR011149061
9781138585379
1138585378
The Arab Gulf States and the West: Perceptions and Realities - Opportunities and Perils by Dania Koleilat Khatib
Dania Koleilat Khatib
UCLA Center for Middle East Development CMED series
Used - Very Good
Paperback
Taylor & Francis Ltd
2018-10-26
320
N/A
Book picture is for illustrative purposes only, actual binding, cover or edition may vary.
This is a used book - there is no escaping the fact it has been read by someone else and it will show signs of wear and previous use. Overall we expect it to be in very good condition, but if you are not entirely satisfied please get in touch with us
Trustpilot