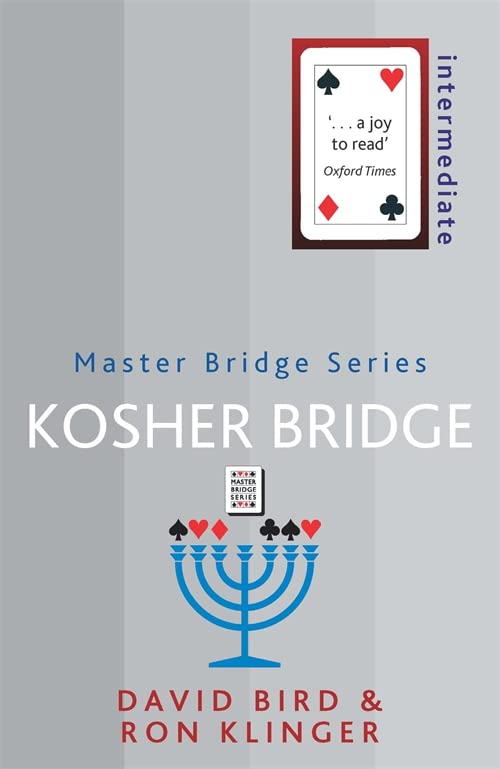 Two famous authors, David Bird of England and Ron Klinger of Australia, have joined forces to present a feast of bridge with a Jewish flavour.

The main character, the Rabbi, kindly and considerate and the star performer, has a gentle sense of fun that pervades the book. This is counter-pointed, as one might expect in a book from David Bird, by the uproarious and often caustic exchanges between the Rabbi's companions as some remarkable sequences unfold at the bridge table.

The bridge is excellent and the stories, spiced with the inimitable Jewish sense of humour, are a delectable mix of the sweet and the acidulous.

This is the type of book that most bridge players would enjoy. It would make an ideal present for your favourite partner. You would likely have the added bonus that your partner's game would improve. * WATERFORD NEWS & STAR *

David Bird (Author)
David Bird is recognised as the world's leading humorous bridge writer. He has written over 130 bridge books, and in the last ten years he has won six 'Book of the Year' awards from the American Bridge Teachers Association - and in 2016 won the International Bridge Press Association Book of the Year Award for The Abbot, the Parrot and the Bermuda Bowl. David contributes regularly to Bridge Magazine, English Bridge, Bridge World, the American Contract Bridge League bulletin and other magazines around the world, as well as Vu-Bridge on the internet. He is also a voice commentator for Bridge Base Online. He lives in Chandlers Ford, Hampshire, England.

Ron Klinger (Author)
Ron Klinger is a leading international bridge teacher and has represented Australia in world championships since 1976. An Australian Grand Master and a World Bridge Federation International Master, he has written over 60 books, some of which have been translated into Bulgarian, Chinese, Danish, French, Hebrew and Icelandic. He has created many new bridge ideas and devised a number of conventions. He lives in NSW, Australia, and has written a daily bridge column in The Sydney Morning Herald and The Sun-Herald for many years.

GOR005751349
Kosher Bridge by David Bird
David Bird
Used - Very Good
Paperback
Orion Publishing Co
2013-03-14
128
0297868675
9780297868675
N/A
Book picture is for illustrative purposes only, actual binding, cover or edition may vary.
This is a used book - there is no escaping the fact it has been read by someone else and it will show signs of wear and previous use. Overall we expect it to be in very good condition, but if you are not entirely satisfied please get in touch with us.