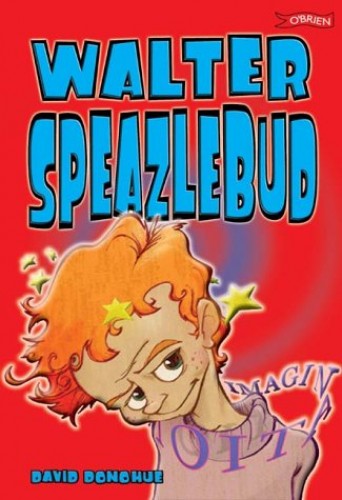 Walter Speazlebud is a whizz at spelling backwards. He also has the power of Noitanigami (Imagination) - he can make people, and animals, go backwards in time - two skills he inherited from his favourite person, his grandfather.

So when his horrible teacher, Mr Strong, starts picking on Walter, he had better watch out. And so had the even more horrible class bully, Danny Biggles. Because when Speazlebud's about, it spells elbuort for all bullies ...

David Donohue has enjoyed a wide and varied career in music and film. Born in Carlow in 1961, he left Ireland in the mid-eighties for New York. There he became the US correspondent for Hot Press Magazine, interviewing among others, James Brown, Lou Reed, Paul Simon, David Bowie, John Cage etc. David went on to produce two highly acclaimed music documentaries: Put Blood in the Music, a quirky look at the New York downtown music scene of the late eighties, and Words for the Dying, which won the 'best documentary' award at the 1991 Ontorio film festival. Horse racing is David's passion and his six-part documentary series on horse racing, 'Turf Wars' was recently broadcast on BBC and RTE. His own songwriting and recording career has resulted in three albums under the alias The Floors, and he has co-written songs with Marianne Faithfull, Brian Kennedy and Sonic Youth. He is currently working with rising star Jack L, as well as supervising music on Jim Sheridan's feature film East of Harlem.

GOR002080915
Walter Speazlebud by David Donohue
David Donohue
Used - Very Good
Paperback
O'Brien Press Ltd
2002-09-03
112
0862787629
9780862787622
N/A
Book picture is for illustrative purposes only, actual binding, cover or edition may vary.
This is a used book - there is no escaping the fact it has been read by someone else and it will show signs of wear and previous use. Overall we expect it to be in very good condition, but if you are not entirely satisfied please get in touch with us.