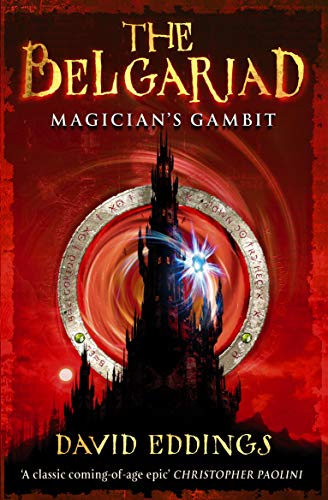 Used Price
$17.99
inc. GST
Free Shipping in Australia
This moment, a clash between the maimed god Torak and the descendant of the Rivan king, is approaching . And Ce'Nedra - a wilful young princess who refuses to believe in sorcery., but is terrified that Garion will die in the coming confrontation .
Reviews:
Trustpilot
Very Good Good Well Read

Many thousands of years ago, two prophecies came into being and a moment was fixed, when only one would determine the future. This moment, a clash between the maimed god Torak and the descendant of the Rivan king, is approaching . . . Garion, was brought up as a farm lad but is now beginning to understand the extent of his part in the prophecy, and working hard to control his sorcerous power. He is travelling towards this meeting in a sinister tower where the evil god lies sleeping. With him is the wise sorcerer Belgarath. And Ce'Nedra - a wilful young princess who refuses to believe in sorcery., but is terrified that Garion will die in the coming confrontation . . .

"A classic coming-of-age epic . . . The Belgariad will always have a place of honor on my bookshelves" -- Christopher Paolini
"Fabulous" -- Anne McCaffrey
"Fun, exciting, intriguing fantasy in which the characters are as important as the quest and magical elements . . . immerse yourself and enjoy!" -- Darren Shan
"Filled with action and trepidation on each turn of the page . . . So those of you who love grouchy gremlins and flying fairies, I would give this book my fullest recommendation" * Irish News *

David Eddings (1931-2009) published his first novel, High Hunt, in 1973, before turning to the field of fantasy with the Belgariad, soon followed by the Malloreon. Born in Spokane, Washington, and raised in the Puget Sound area north of Seattle, he received his Bachelor of Arts degree from Reed College in Portland, Oregon, in 1954, and a master of arts degree from the University of Washington in 1961. He served in the US Army, worked as a buyer for the Boeing Company, and was both a grocery clerk and a college English teacher. He lived in Nevada until his death, at the age of 77.

GOR001331664
Belgariad 3: Magician's Gambit by David Eddings
David Eddings
The Belgariad (RHCP)
Used - Very Good
Paperback
Random House Children's Publishers UK
2006-09-07
448
0552554782
9780552554787
N/A
Book picture is for illustrative purposes only, actual binding, cover or edition may vary.
This is a used book - there is no escaping the fact it has been read by someone else and it will show signs of wear and previous use. Overall we expect it to be in very good condition, but if you are not entirely satisfied please get in touch with us.