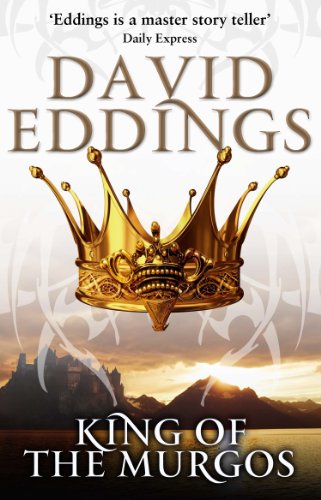 King Of The Murgos
by David Eddings

BOOK 2 OF THE MALLOREON, the worldwide bestselling fantasy series by one of the godfathers of the tradition. Discover the epic stories that inspired generations of fantasy writers - from Raymond Feist's The Riftwar Cycle to George R.

King Of The Murgos Summary

BOOK 2 OF THE MALLOREON, the worldwide bestselling fantasy series by one of the godfathers of the tradition. Discover the epic stories that inspired generations of fantasy writers - from Raymond Feist's The Riftwar Cycle to George R. R. Martin's A Game of Thrones.

He will travel even to the edge of the world...

Garion and Ce'Nedra are on a desperate journey to find their young son Geran. His kidnapper Zandramas is powerful and elusive, with many disguises. But they must not give in to despair, or all is lost.

Their search leads through the foul swamps of Nyissa, and on into the dark Kingdom of the Murgos, where human sacrifices are still made to the dead god Torak.

In the end they must face the ultimate danger - not only to themselves but to all mankind...

Customer Reviews - King Of The Murgos

David Eddings (1931-2009) published his first novel, High Hunt, in 1973, before turning to the field of fantasy with The Belgariad, soon followed by The Malloreon.

Born in Spokane, Washington, and raised in the Puget Sound area north of Seattle, he received his Bachelor of Arts degree from Reed College in Portland, Oregon, in 1954, and a master of arts degree from the University of Washington in 1961.

He served in the US Army, worked as a buyer for the Boeing Company, and was both a grocery clerk and a college English teacher. He lived in Nevada until his death, at the age of 77.

GOR005467587
King Of The Murgos: (Malloreon 2) by David Eddings
David Eddings
The Malloreon (TW)
Used - Very Good
Paperback
Transworld Publishers Ltd
2013-02-14
448
0552168580
9780552168588
N/A
Book picture is for illustrative purposes only, actual binding, cover or edition may vary.
This is a used book - there is no escaping the fact it has been read by someone else and it will show signs of wear and previous use. Overall we expect it to be in very good condition, but if you are not entirely satisfied please get in touch with us.