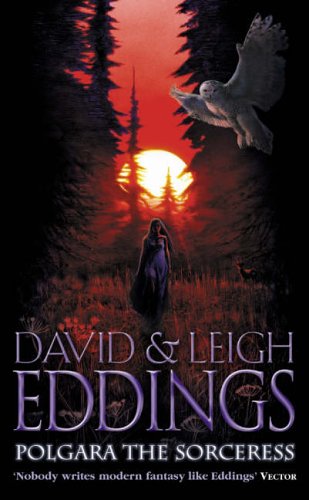 Polgara the Sorceress
by David Eddings

The last and most amazing volume in the legendary Belgariad series: the story of the queen of truth, love, rage and destiny, Polgara the Sorceress.

Polgara the Sorceress by David Eddings

The last and most amazing volume in the legendary Belgariad series: the story of the queen of truth, love, rage and destiny, Polgara the Sorceress.

The queen of truth, love, rage and destiny reveals all.

Polgara the Sorceress is the crowning achievement of the great fantasy epic which began with The Belgariad and continued with The Malloreon. Once again David and Leigh Eddings display the epic imagination, humour, and storytelling power which have made this series the most popular fantasy of modern times. In the story of Polgara, a beautiful woman whose constancy and inner power have been the foundation of all the luck and love that have saved the world, the full truth of The Belgariad is revealed.

'I wished Polgara the Sorceress was longer . . . the characters are vivid and genuinely likeable, and there's an easy lilt to the prose which makes reading it pure pleasure. It's a wonderful book' SFX

`My ideal summer read... Having enjoyed the entire ten-book serial, I was delighted to be able to read this latest addition as it not only provides fantastic escapism in itself, but, being a prequel, will make my re-reading of the other books all the more fascinating.'
The Irish Times

`Offers an absorbing storyline and some memorable characters as, once again, the authors touch all the right fantasy bases, with warring gods, political intrigues, supernatural creatures and appealingly human magicians involved in a titanic war over the course of seven millennia. Eddings fans will no doubt snatch this novel off the shelves while readers new to the authors' world won't find a more appropriate place to begin exploring it.'
Publishers Weekly

`There's no denying the Eddingses' offerings do entertain. This novel is for fantasy fans fed up with more fusty fare, or for anyone who likes mischief and merriment.'
West Australian

GOR001448999
Polgara the Sorceress by David Eddings
David Eddings
Used - Very Good
Paperback
HarperCollins Publishers
2006-05-02
816
0007217102
9780007217106
N/A
Book picture is for illustrative purposes only, actual binding, cover or edition may vary.
The book has been read but remains in clean condition. All pages are intact and the cover is intact. Some minor wear to the spine.