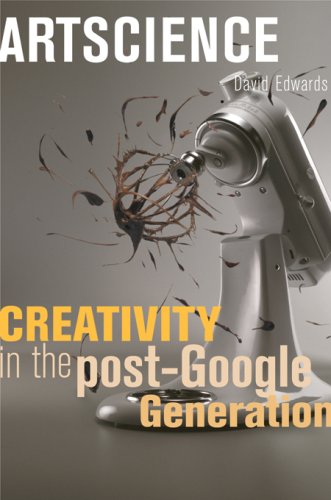 In Stock
$53.99
inc. GST
Describes how contemporary creators achieve breakthroughs in the arts and sciences by developing their ideas in an intermediate zone of human creativity where neither art nor science is easily defined.
Very Good
Only 1 left

Artscience: Creativity in the Post-Google Generation by David Edwards

Scientists are famous for believing in the proven and peer-accepted, the very ground that pioneering artists often subvert; they recognize correct and incorrect where artists see only true and false. And yet in some individuals, crossover learning provides a remarkable kind of catalyst to innovation that sparks the passion, curiosity, and freedom to pursue - and to realize - challenging ideas in culture, industry, society, and research. This book is an attempt to show how innovation in the "post-Google generation" is often catalyzed by those who cross a conventional line so firmly drawn between the arts and the sciences.David Edwards describes how contemporary creators achieve breakthroughs in the arts and sciences by developing their ideas in an intermediate zone of human creativity where neither art nor science is easily defined. These creators may innovate in culture, as in the development of new forms of music composition (through use of chaos theory), or, perhaps, through pioneering scientific investigation in the basement of the Louvre. They may innovate in research institutions, society, or industry, too. Sometimes they experiment in multiple environments, carrying a single idea to social, industrial, and cultural fruition by learning to view traditional art-science barriers as a zone of creativity that Edwards calls artscience.Through analysis of original stories of artscience innovation in France, Germany, and the United States, he argues for the development of a new cultural and educational environment, particularly relevant to today's need to innovate in increasingly complex ways, in which artists and scientists team up with cultural, industrial, social, and educational partners.

Edwards' book is something of a manifesto for artscience, and for the need to cultivate more porous cultural, corporate and educational institutions...Arguing passionately for the need for new collaborations between scientists, artists, industry and the social sector, "Artscience: Creativity in the Post-Google Generation" is ultimately a collection of enticing tales from the trenches for would-be practitioners.--Michael John Gorman"Irish Times" (02/02/2008)
["Artscience"] is less a technical tool than a motivational one: an exhortation for interdisciplinary intellectuals...Edwards infects us with his subjects' creativity. When the final chapter turns from vignettes to his utopian Laboratoire, we're rooting for it to succeed.--Alice W. Flaherty"Nature" (01/17/2008)
Edwards attempts in this truly inspiring work to shed light on the perceived dichotomy between the arts and sciences and why it needs to be challenged. He looks closely at the idea of translating concepts or ideas through pure sciences and the arts as they occur in all sectors of life. Essentially, he shows how scientific ideas flourish in the artistic community and how art can inspire science. Edwards takes interdisciplinary thinking to another level, going a long way in demonstrating a kind of symbiosis that can--and for many, does--exist between the arts and sciences. He relates stories of 'artscience' innovation in France, Germany, and the United States; discusses his recent founding of Le Laboratoire, an artscience cultural center in Paris; and explains the theory behind his idea of the "laboratory."--Michael McArthur"Library Journal" (12/15/2007)
There are scientists, and there are artists. Now, there are art scientists. In his new book, "Artscience: Creativity in the Post-Google Generation", David Edwards explains how this group of thinkers melds the two disciplines in innovative ways to make lasting and important breakthroughs for the betterment of humanity, culture, academia, and industry.--V. L. Hendrickson"New York Sun" (03/13/2008)
In his concise book, Edwards, a professor of biomedical engineering at Harvard, shares the stories of people who have found ways to cross this barrier [between art and science]--artscientists, he calls them--and elegantly communicates the catalytic effect of their interdisciplinary leaps.--Daniella Maestretti"Utne Reader" (07/01/2008)

David Edwards is founder of Le Laboratoire, a new artscience center in Paris, and Gordon McKay Professor of the Practice of Biomedical Engineering, Harvard University.

GOR003242712
Artscience: Creativity in the Post-Google Generation by David Edwards
David Edwards
Used - Very Good
Hardback
Harvard University Press
2008-01-08
178
067402625X
9780674026254
N/A
Book picture is for illustrative purposes only, actual binding, cover or edition may vary.
This is a used book - there is no escaping the fact it has been read by someone else and it will show signs of wear and previous use. Overall we expect it to be in very good condition, but if you are not entirely satisfied please get in touch with us.