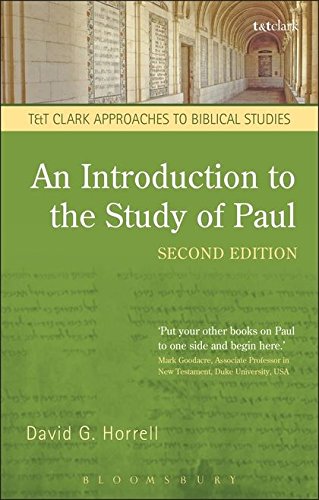 An Introduction to the Study of Paul
by David G. Horrell

Out of Stock
$26.49
inc. GST
Considering apostle Paul's importance and influence, and the important sources for the study of Paul, this second edition examines: the earliest period of Christianity - from Jesus to Paul; Paul's life before and after his 'conversion'; his individual letters; the major elements of his theology; his attitude to Israel and the Jewish law; and more.
Very Good
Only 0 left

An Introduction to the Study of Paul Summary

An Introduction to the Study of Paul by David G. Horrell

This study introduces the different aspects of the study of the apostle Paul, primarily to the differing positions and methods developed by contemporary scholars in Pauline studies. By setting out these views, and the evidence on which they are based, Horrell equips the reader to approach the study of Paul, with an awareness of the range of current debate and knowledge of the evidence and arguments they will encounter. After considering Paul's importance and influence, and the important sources for the study of Paul, the book examines: the earliest period of Christianity - from Jesus to Paul; Paul's life before and after his 'conversion'; his individual letters; the major elements of his theology; his attitude to Israel and the Jewish law; new approaches to the study of Paul, including social-scientific and feminist approaches; and Paul's legacy in the New Testament and beyond. In this second edition, the discussion of Pauline studies is brought right up-to-date. Sections dealing with areas of ongoing debate (e.g. on the 'new perspective'; the social level of the Pauline Christians) have been extended in the light of the most recent discussion. New sections have been added on: Paul's 'worlds' (Jewish and Greco-Roman: ch. 1); Paul's use of scripture (in ch. 5); and Political dimensions of Paul's gospel (ch. 7). The bibliography and suggestions for further reading are updated and each chapter includes a list of study questions.

An Introduction to the Study of Paul Reviews

"This slim but substantive volume concisely surveys the many questions raised by Paul's letters and the various answers put forward by scholars. Where there is a clear consensus, the author describes it. Where there is ongoing debate e.g., with respect to chronology, Christology, or Paul's use of scripture he generally lays out the best arguments available for each side. One comes away with a better understanding of Paul, despite the author's modest claim that he is simply preparing students to read the apostle with a sympathetic yet critical eye. In addition to useful study questions at the end of each chapter and updated bibliographies, Horrell has augmented the text of this second edition to include discussions of the "new perspective" on Paul, the narrative substructure of his theology, the pistis Christou debate, Paul's ethics, and other topics. Highly recommended for introducing students to Pauline studies.
Patrick Gray, Rhodes College, Religious Studies Review
'A clear, concise and well-structured book.'
--Sanford Lakoff
'...it would be hard to find a more useful concise introduction to the study of Paul.'

--Sanford Lakoff
'Horrell introduces readers to the basic questions in Pauline studies, and acquaints them with the major arguments about the possible answers to those questions. The first edition of the book was required reading in my classes on Paul. This expanded second edition will certainly help anyone who wants to learn more about the current debates regarding the significance of Paul's life and work.'
--Sanford Lakoff
'David Horrell has written the perfect introduction to the study of Paul. Horrell summarises the key areas with enthusiasm and good judgement, offering pointers to the major scholarship with admirable clarity. This book is ideal for undergraduate students setting out on their study of the apostle's life, letters and thought. Put your other books on Paul to one side and begin here.'
--Sanford Lakoff
'The new materials that have been added to this edition clearly enhance its value as an introduction to the field... it is hard to think of any major issues that have been neglected.'

'...a well-written and helpful book that offers a solid introduction to the field of Pauline students for undergraduate or graduate students'

'Like the first edition, this books fills a special niche in the universe of introductory texts on the apostle Paul.' - Christopher D. Stanley, RBL--Sanford Lakoff "Rbl "
'an admirable introduction'

'Discussions throughout are clear and crisp. Diverse viewpoints are fairly presented, and Horrell is generally careful to point out how opposing views both find support in the primary sources. It is difficult to imagine how students could better be introduced to the discipline of Pauline scholarship.'

'students for whom this textbook is assigned will undoubtedly be well served.'
- Stephen Westerholm, RBL--Sanford Lakoff "Rbl "

David G. Horrell is Lecturer in New Testament Studies in the Department of Theology at the University of Exeter and has taught Paul for nearly fifteen years. He is the author of The Social Ethos of the Corinthian Correspondence.

List of Figures; Abbreviations; Preface; 1 Introduction: Paul the man-mountain; 2 From Jesus to Paul: pre-Pauline Christianity; 3 Paul's life: before and after his encounter with Christ; 4 Paul the letter-writer; 5 Paul the theologian: the central elements of Paul's gospel; 6 Paul, Israel and the Jewish law; 7 New approaches to the study of Paul: social-scientific and feminist interpretation; 8 Paul's legacy in the New Testament and beyond; 9 Coming full circle: why study Paul today? Bibliography. Index of biblical references; Index of subjects and authors.

GOR005579915
An Introduction to the Study of Paul by David G. Horrell
David G. Horrell
T&T Clark Approaches to Biblical Studies
Used - Very Good
Paperback
Bloomsbury Publishing PLC
2006-05-01
192
0567040836
9780567040831
N/A
Book picture is for illustrative purposes only, actual binding, cover or edition may vary.
This is a used book - there is no escaping the fact it has been read by someone else and it will show signs of wear and previous use. Overall we expect it to be in very good condition, but if you are not entirely satisfied please get in touch with us.