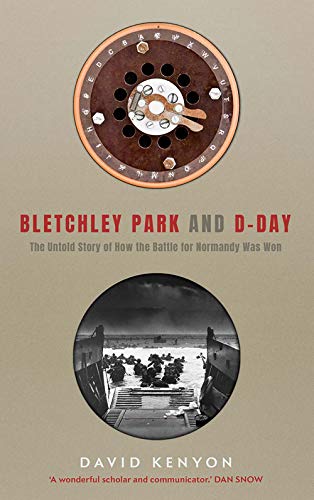 Since the secret of Bletchley Park was revealed in the 1970s, the work of its codebreakers has become one of the most famous stories of the Second World War. But cracking the Nazis' codes was only the start of the process. Thousands of secret intelligence workers were then involved in making crucial information available to the Allied leaders and commanders who desperately needed it.

Using previously classified documents, David Kenyon casts the work of Bletchley Park in a new light, as not just a codebreaking establishment, but as a fully developed intelligence agency. He shows how preparations for the war's turning point-the Normandy Landings in 1944-had started at Bletchley years earlier, in 1942, with the careful collation of information extracted from enemy signals traffic. This account reveals the true character of Bletchley's vital contribution to success in Normandy, and ultimately, Allied victory.

"Using previously classified documents, this book casts the work of Bletchley Park in a new light"-Military History
"Pleasingly, David Kenyon's Bletchley Park and D-Day shines out and makes for very interesting in-depth reading, as it gives an illuminating examination of the intelligence operations that helped to secure the Allied victory at Normandy"- Melody Foreman, Britain at War
"David Kenyon and Bletchley Park is the dream ticket. A wonderful scholar and communicator writing about one of the world's most fascinating historical sites." - Dan Snow, historian, documentary filmmaker and television presenter

David Kenyon is the Research Historian at Bletchley Park.

GOR010032922
Bletchley Park and D-Day by David Kenyon
David Kenyon
Used - Very Good
Hardback
Yale University Press
2019-05-10
320
030024357X
9780300243574
N/A
Book picture is for illustrative purposes only, actual binding, cover or edition may vary.
This is a used book - there is no escaping the fact it has been read by someone else and it will show signs of wear and previous use. Overall we expect it to be in very good condition, but if you are not entirely satisfied please get in touch with us.