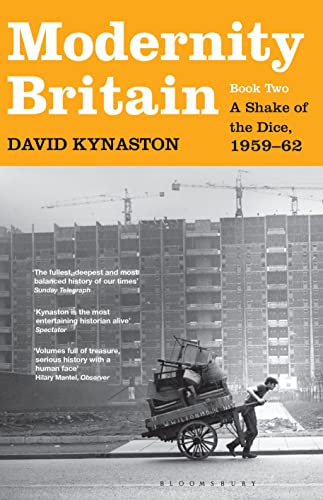 Modernity Britain: Book Two: A Shake of the Dice, 1959-62 by David Kynaston

David Kynaston's history of post-war Britain has so far taken us from the radically reforming Labour governments of the late 1940s in Austerity Britain, through the growing prosperity of Family Britain's more placid 1950s, to the very cusp of the 1960s and the coming of a new Zeitgeist in Modernity Britain. The first part, Opening the Box, 1957-59, plotted the main themes of the new spirit of the age. Now, in part two - A Shake of the Dice, 1959-62 - through a rich haul of diaries, letters, newspapers and many other sources, Kynaston gets up close to a turbulent era as the speed of social change accelerated. By 1959 consumerism was inexorably taking hold (stripes for Signal toothpaste, flavours for potato crisps), relative economic decline was becoming the staple of political discourse (entry into Europe increasingly seen as our salvation), immigration was turning into an ever-hotter issue (the controversial coming of controls), traditional norms of morality were perceived as under serious threat (Lady Chatterley's Lover freely on sale after the famous case), and traditional working-class culture was changing (wakes weeks in decline, the end of the maximum wage for footballers) even as Coronation Street established itself as a national institution. The greatest shake of the dice, though, concerned urban redevelopment: city centres were being yanked into the age of the motor car, slum clearance was intensified, and the skyline became studded with brutalist high-rise boxes. Some of this transformation was necessary, but too much would destroy communities and leave a harsh, fateful legacy. This profoundly important story of the period of transformation from the old to the brink of a new world is now told brilliantly and in full for the first time.
Triumphant ... A historian of peerless sensitivity and curiosity about the lives of individuals. His method is to immerse first himself, then his readers, in a deep quotidian fabric of the time, making every strand visible before gradually lifting his gaze and revealing the wider pattern * Financial Times *
He compresses the vivid fragments so that a subtle but irresistible narrative emerges from them: more mosaic, perhaps, than collage ... Kynaston skilfully balances accounts of the damp, stink and filth of the old slums (and the desire to escape) with the haughty certainties of the planners and - very quickly - the unhappy reality of the change forced upon millions * Andrew Marr, New Statesman *
David Kynaston's social history of post-war Britain is an an accessible, humane, illuminating and entirely admirable project, a riveting description of a country changing month by month, like a complicated but deeply loveable person. Kynaston takes everything that is important to us - politics, labour relations, sport, television, literature, the weather - and turns it all into the definitive story of who we are and how we got that way. I adore these books * Nick Hornby *
This compelling history of the nation is wise, funny, impeccably researched and beautifully written ... Not for one second does his writing sag under the weight of his research: if you asked him to plod, he simply wouldn't know how ... This latest volume will be every bit as addictive as its predecessors ... Like a great composer, Kynaston dots little melodies into the opening minutes which he later allows to swell into major themes ... The best way to review this book would be to take a leaf from Lewis Carroll and map it all out, word for word. As it is, you'll just have to save me the effort by reading it for yourself * Craig Brown, Mail on Sunday *
Richly detailed series ... Indefatigable, judicious, with a magpie's eye for detail and a lovely grasp of tone and balance, David Kynaston is one of the great chroniclers of our modern story ... Every paragraph contains some glittering nugget * Sunday Times *
An exciting read, containing moments of suspense and lengthy sections of analysis ... Kynaston's book makes salutary and urgent reading, suggesting that we might do well to live with half an eye on the Kynastons of the future * Lara Feigel, Observer *
He is chewing his way through the giant lettuce-leaf of his chosen decades like a particularly thorough tortoise. Hares: watch out ... Kynaston is interested in getting the feel of life close up, and his range of sources is formidable * Spectator *
Masterful ... Kynaston has an enviable ability to see both the trees and the wood, and patterns start to appear ... Kynaston's project is already being acclaimed as one of the great achievements of modern history, and this fourth instalment, with its entrancing mix of entertainment, erudition and enlightenment, will enhance its status further * Daily Telegraph *
This superb history captures the birth pangs of modern Britain ... It is a part of Kynaston's huge achievement that such moments of insight and pleasure should accompany what has become a monumental history of our recent past * The Times *
David Kynaston was born in Aldershot in 1951. He has been a professional historian since 1973 and has written eighteen books, including The City of London, a widely acclaimed four-volume history, and WG's Birthday Party, an account of the Gentleman v. Players match at Lord's in July 1898. He is the author of Austerity Britain, 1945-51 and Family Britain, 1951-57, the first two titles in a series of books covering the history of post-war Britain (1945-79) under the collective title 'Tales of a New Jerusalem'. He is currently a visiting professor at Kingston University.
GOR006330646
9781408844397
1408844397
Modernity Britain: Book Two: A Shake of the Dice, 1959-62 by David Kynaston
David Kynaston
Used - Very Good
Hardback
Bloomsbury Publishing PLC
2014-09-11
464
Winner of Paddy Power Political Book Awards: Political History Book of the Year 2015 Short-listed for Orwell Prize 2015
Book picture is for illustrative purposes only, actual binding, cover or edition may vary.
This is a used book - there is no escaping the fact it has been read by someone else and it will show signs of wear and previous use. Overall we expect it to be in very good condition, but if you are not entirely satisfied please get in touch with us
Trustpilot