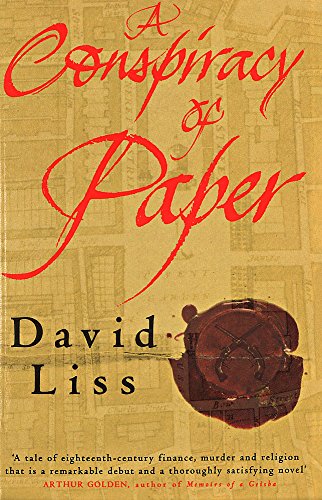 A Conspiracy Of Paper
by David Liss

In Stock
$16.49
inc. GST
A garrulous prostitute. A Jewish boxer. The mysterious death of a father ... and the origins of the modern stock market.
Very Good Good
10 in stock

A Conspiracy Of Paper Summary

A Conspiracy Of Paper by David Liss

Benjamin Weaver is an outsider in eighteenth-century London: a Jew among Christians; a ruffian among aristocrats; a retired pugilist who, hired by London's gentry, travels through the criminal underworld in pursuit of debtors and thieves. In A CONSPIRACY OF PAPER, Weaver must investigate a crime of the most personal sort, involving the mysterious death of his estranged father, a notorious stockdealer. To find the answers, Weaver contends with a garrulous prostitute who knows too much about his past, estranged relatives who remind him of his alienation from the Jewish faith, and a group of powerful men in the world of finance who have disguised their business dealings with an intricate web of deception and violence. Relying on brains and brawn, Weaver uncovers the beginnings of a strange new economic order based on stock speculation - a way of life that poses great risk for investors, but real danger for Weaver and his family.

A Conspiracy Of Paper Reviews

.....a tale of eighteenth century finance, murder and religion that is a remarkable debut and a thoroughly satisfying novel * Arthur Golden, author of MEMOIRS OF A GEISHA *
A tremendously smart, assured and entertaining novel; an intricate mystery, a colourful rogues' gallery and, improbably, a history lesson on the birth of the stock market * NEWSWEEK *
An evocation of English history that you can happily get lost in for days. * NEW YORK TIMES *
...Adroitly plotted and related with a good deal of panache * SUNDAY TELEGRAPH *
Deft financial suspense that sets Liss's book apart from the run-of-the-mill historical novel * TIMES *

David Liss was born in 1966 and grew up in south Florida. He is currently a doctoral candidate in the Department of English at Columbia University. He lives in New York City.

GOR001625186
A Conspiracy Of Paper by David Liss
David Liss
Used - Very Good
Paperback
Little, Brown Book Group
2001-05-03
512
034911420X
9780349114200
N/A
Book picture is for illustrative purposes only, actual binding, cover or edition may vary.
This is a used book - there is no escaping the fact it has been read by someone else and it will show signs of wear and previous use. Overall we expect it to be in very good condition, but if you are not entirely satisfied please get in touch with us.