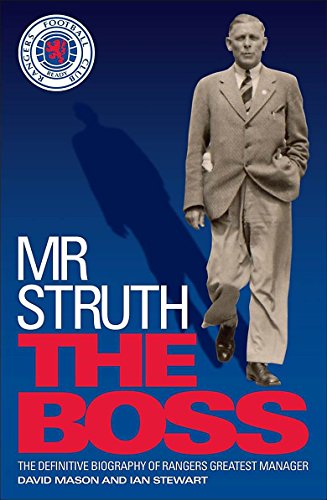 In Stock
$24.49
inc. GST
The fascinating and definitive biography of Rangers' greatest ever manager.
Like New Very Good Well Read
Only 1 left

Bill Struth is the most celebrated Manager in the history of Rangers Football Club. In his 34 year tenure, he led the club to 30 major trophies and nurtured many of the club's greatest players. To them, he was simply 'Mr. Struth' - a father figure who guided them with the principle that, '... to be a Ranger is to sense the sacred trust of upholding all that such a name means in this shrine of football.'

If these words set the ideals for his players to attain, his own personal life was clouded by moments of indiscretion which were to influence the course of his life and career.

Drawing on family accounts and Rangers archives, the book explores his early life in Edinburgh and Fife, as well as his celebrated years in Glasgow. It recounts his career in professional athletics and in football with Heart of Midlothian, Clyde and ultimately, Rangers. It reflects on the legacy of the Struth era and his influences that remain at Ibrox today.

David Mason - Official Club Historian at Rangers Football Club since 1986, he is one of the most authoritative writers on the history of the club. He has written for various football publications and has appeared on television and radio. He was author of Rangers: The Managers and A Match to Remember.

Ian Stewart - Author of My Helicopter Sunday, Ian is a civil servant who has been a season ticket holder at Ibrox for 25 years. His interest in Rangers Football Club and William Struth has been an obsession and Mr Struth - The Boss is the culmination of long hours of research.

GOR010309853
Mr Struth: The Boss by David Mason
David Mason
Used - Like New
Paperback
Headline Publishing Group
2014-07-03
320
0755365496
9780755365494
N/A
Book picture is for illustrative purposes only, actual binding, cover or edition may vary.
This is a used book - there is no escaping the fact it has been read by someone else and it will show signs of wear and previous use. Overall we expect it to be in very good condition, but if you are not entirely satisfied please get in touch with us.