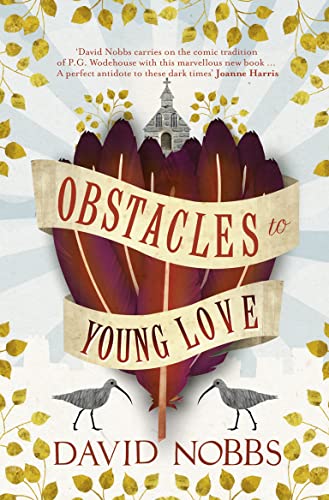 From one of the greatest comedic writers of a generation comes a story of love, faith and taxidermy.

From one of the greatest comedic writers of a generation comes a story of love, faith and taxidermy.

1978: Two lovers perch precariously on the cusp of adulthood. Timothy's father decides it's time for him to take on the family taxidermy business; while Naomi dreams of a career on the stage.

Across the decades their lives continue to interweave, and occasionally cross - bound by the pull of intoxicating first love. But will their destinies ultimately unite them?

Nobbs moves his exceptional comic talent to a new-found depth. Memorable and moving, a tale of love won and love lost. You will never look at the art of taxidermy in the same way again.

Praise for Obstacles to Young Love:

`Thank goodness for David Nobbs! He carries on the comic tradition of P G Wodehouse with this marvellous new book; a sweet and touching love story written with his trademark sly and subversive humour. A perfect antidote to these dark times.' Joanne Harris

`A delicious entertainment, as comic and sharp as they come' Guardian

`The most satisfying novel I have read in years' Express

`We should be thankful for the continuing brilliance of David Nobbs ... Going Gently is richly funny and rich in many other ways. Buy it' Mail on Sunday

David Nobbs's first break as a comedy writer came on the iconic satire show That Was The Week, That Was, hosted by David Frost. Later he wrote for The Frost Report and The Two Ronnies and provided material for many top comedians including Les Dawson, Ken Dodd, Tommy Cooper, Frankie Howerd and Dick Emery. Apart from his twenty novels, David is best known for his two TV hit series A Bit of a Do and for The Fall and Rise of Reginald Perrin. David Nobbs died in 2015 at the age of eighty.

GOR001978938
Obstacles to Young Love by David Nobbs
David Nobbs
Used - Very Good
Paperback
HarperCollins Publishers
2010-06-10
432
0007286287
9780007286287
N/A
Book picture is for illustrative purposes only, actual binding, cover or edition may vary.
This is a used book - there is no escaping the fact it has been read by someone else and it will show signs of wear and previous use. Overall we expect it to be in very good condition, but if you are not entirely satisfied please get in touch with us.