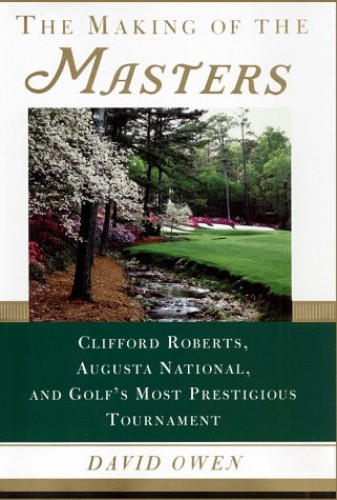 The Making of the Masters
by David Owen

Used Price
$20.99
inc. GST
Free Shipping in Australia
A history of the prestigious Masters Golf Tournament draws on the archives of the Augusta National Golf Club to trace the evolution of the event.
Very Good Good

The Making of the Masters Summary

The Making of the Masters: Clifford Roberts, Augusta National, and Golf's Most Prestigious Tournament by David Owen

"If you asked golfers what tournament they would rather win over all the others," golfing great Sam Snead once said, "I think every one of them to a man would say the Masters." Played on the magnificent course designed by Bob Jones and Alister MacKenzie for the Augusta National Golf Club, the Masters has become the dividing line between winter and spring for even the casual golf fan -- and the hallmark of greatness for the pros who walk its fairways.

Unlike the three other major tournaments that define the golf season, the Masters is not run by a national governing body, either of the game or of its professionals. It is run by a private club, which sets the requirements for qualification. The prize is not a championship title but the club's green blazer. So how is it that this private gathering has become the most glamorous, most watched, and most imitated golf tournament in the world?

The usual answers to this question are: the prestige brought to the tournament from its beginnings by the presence of Bobby Jones, still listed on the Club's masthead as President in Perpetuity nearly three decades after his death; the beauty of the golf course, with its dogwoods and azaleas in dazzling April bloom; and the drama that develops on the back nine every annual Sunday, as the magnificent risk-reward aspects of the course permit great things to be achieved by great players.

But the hidden and greatly misunderstood figure in the history of the Masters and Augusta National is Clifford Roberts, the club's chairman from its founding in 1931 until shortly before his suicide in 1977. Roberts's meticulous attention to detail, his firm authoritarian hand, and his skill at constantlyimagining improvements where others already saw perfection helped build the Masters into the tournament it is today, and Augusta National into every golfer's view of how heaven should look.

It was Roberts who saw the club through its troubled early years -- for, hard as it is to realize today, the survival of Augusta National was an open question until well after World War II. Roberts's was the most powerful voice in all club matters; business meetings were generally brief, since only one opinion mattered, and the meetings themselves were often a pretense to draw in members for friendly if fiercely waged matches. His friendship with Jones is what brought the club into being; his bond with Dwight D. Eisenhower gave the club its greatest cachet. And his dealings with CBS, which has televised the tournament since 1956, guided the network into the modern era of sports broadcasting.

To tell the story of the club, the Masters, and its idiosyncratic founder, acclaimed author David Owen was granted unprecedented access to the archives, records, and membership of Augusta National Golf Club. Owen found Roberts to be a character every bit as intriguing and vibrant as his more celebrated co-founder. And he uncovered a wealth of evidence debunking the popular perception that all that is best about Augusta National should be credited primarily to Jones. As it was written of Sir Christopher Wren, architect of London's St. Paul's Cathedral, so it may be said of Clifford Roberts on Masters Sunday at the club he built and loved: "If you seek his monument, look around you."

GOR002986261
The Making of the Masters: Clifford Roberts, Augusta National, and Golf's Most Prestigious Tournament by David Owen
David Owen
Used - Very Good
Hardback
Simon & Schuster Ltd
1999-04-06
289
0684857294
9780684857299
N/A
Book picture is for illustrative purposes only, actual binding, cover or edition may vary.
This is a used book - there is no escaping the fact it has been read by someone else and it will show signs of wear and previous use. Overall we expect it to be in very good condition, but if you are not entirely satisfied please get in touch with us.