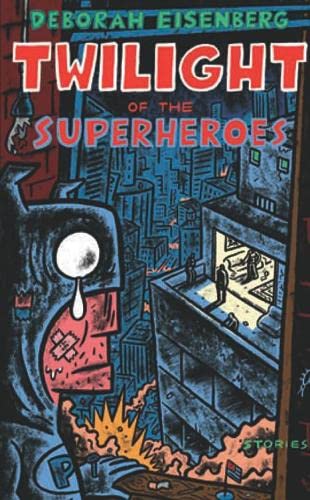 Twilight of the Superheroes
by Deborah Eisenberg

In Stock
$21.49
inc. GST
An astonishing new book by one of America's finest storytellers
Very Good
5 in stock

Twilight of the Superheroes Summary

Twilight of the Superheroes by Deborah Eisenberg

Deborah Eisenberg is nearly unmatched in her mastery of the short story form. Now, in her newest collection, she demonstrates once again her virtuosic abilities in precisely distilled, perfectly shaped studies of human connection and disconnection. From a group of friends whose luck in acquiring a luxurious Manhattan sublet turns to disaster as their balcony becomes a front-row seat to the catastrophe of 9/11; to the Roman holiday of a schoolteacher running away from the news of her ex-husband's life-threatening illness, and her unlikely guide, a titled art scout in desperate revolt against his circumstances and aging; to the too painful love of a brother for his schizophrenic sister, whose tragic life embitters him to the very idea of family, Eisenberg evokes, in brooding passionate and brilliant prose, a brutally honest portrait of our lives today, showing us truths which are both poetic and deeply political.

'Like Alice Munro, virtually her only equal in the field, Deborah Eisenberg seems incapable of writing a bad short story . . . Eisenberg's writing at times approaches the beauty of a line of poetry. She manipulates her readers with a master's blend of humor and poignancy. Her stories are wondrous' San Francisco Chronicle

Twilight of the Superheroes Reviews

Praise for "All Around Atlantis:
"Small masterpieces...[a] dazzling collection....Like Alice Munro, virtually her only equal in the field, Deborah Eisenberg here seems incapable of writing a bad short story...She focuses on misfits, people who don't feel at home in the world. So skilled is she at developing these characters as engagingly 'ordinary' that we find ourselves identifying with them without realizing how we got there....Eisenberg's writing at times approaches the beauty of a line of poetry. She manipulates her readers with a master's blend of humor and poignancy. Her stories are wondrous." --David Wiegand, "San Francisco Chronicle
"In his preface to "What Maisie Knew, Henry James reminds us that 'small children have many more perceptions than they have terms to translate them.' The writer, James was suggesting, might by a certain sleight of hand grant fictional children a language that honors these intuitions, this inner life.... No contemporary American fiction has demonstrated James's suggestion more powerfully than Deborah Eisenberg's, beginning with her first story collection ... and continuing with her newest, "All Around Atlantis." --Jim Shephard, "The New York Times Book Review
"There aren't many contemporary novels as shudderingly intimate and mordantly funny as Eisenberg's best stories."--Ben Marcus, "The New York Times Book Revie"w
"A masterly collection . . . Instead of forcing her characters' stories into neat, arbitrary, preordained shapes, Deborah Eisenberg allows them to grow organically into oddly shaped, asymmetrical narratives--narratives that possess all the surprising twists and dismaying turns of real life."--Michiko Kakutani, "The New York Times"
"Eisenberg's filament-thin weavings of desire, obligation, and missed opportunities remind one strongly of Henry James. . . . Eisenberg is a master of condensation and reconstruction, making beautiful murals from broken glass."--"O, The Oprah Magazine"
"Ambitious and resonant . . . Whether the subjects be lovely young girls grown old or waning superpowers, Eisenberg makes masterful short work out of marking their decline and fall."--NPR's "Fresh Air"
"The deepest pleasure in Ms. Eisenberg's stories is their vertiginous unpredictability, like obstacle courses the author jumps and rolls and shimmies through, clasping the reader to her like an infant. . . . These are fearless, fierce, light-bearing stories, offered in defense of what still matters."--"The New York Observer"
"Dazzling . . . Her distinctive voice and mastery of the short story elevate her to the ranks of kindred spirits like Gina Berriault, Alice Munro, and even Chekhov."--"Time Out New York"
"With every story in this superb new collection, Deborah Eisenberg, one of America's finest writers, offers new ways of seeing and feeling, as if something were being perfected at the core. The half dozen long stories here puther light years ahead of most story writers."--Alan Cheuse, "San Francisco Chronicle""" "Outstanding . . . Eisenberg offers enough insight and intelligent observation to amply justify her reputation as the American Alice Munro."--Yvonne Zipp, "Christian Science Monitor,"
"Like other current masters of the short story--Joy Williams, Lycia Davis, Ben Marcus--Eisenberg works her own fertile ground so faithfully and assiduously that she brooks no comparison. She simply writes like no one else."--Lisa Shea, "Elle"
"He stories are so skillfully crafted that they seem composed more of shapes and textures than of printed words. Reading her makes you wish, as you study the family in front of you in the grocery line, that you could see their thoughts rendered as one of Eisenberg's stunning inner monologues"
--Judith Lewis, "Los Angles Times"

Deborah Eisenberg is the author of several previous collections of stories. The recipient of a Whiting Writers' Award and a Guggenheim fellowship, she lives in New York City and teaches at the University of Virginia.

GOR001406114
Twilight of the Superheroes by Deborah Eisenberg
Deborah Eisenberg
Used - Very Good
Hardback
Pan Macmillan
2006-07-07
320
033044459X
9780330444590
N/A
Book picture is for illustrative purposes only, actual binding, cover or edition may vary.
This is a used book - there is no escaping the fact it has been read by someone else and it will show signs of wear and previous use. Overall we expect it to be in very good condition, but if you are not entirely satisfied please get in touch with us.