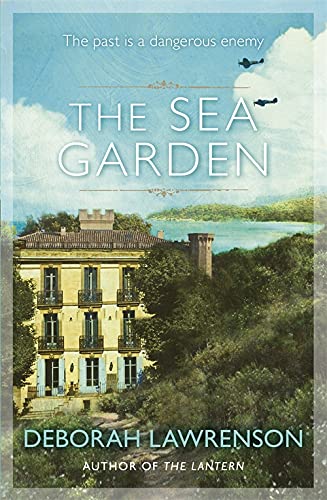 The Sea Garden
by Deborah Lawrenson

Used Price
$13.69
inc. GST
Free Shipping in Australia
Following on from her TV Book Club success with THE LANTERN, Deborah Lawrenson returns to the south of France with another captivating story of wartime love, secrets and bravery.
Very Good

The Sea Garden by Deborah Lawrenson

Following on from her TV Book Club success with THE LANTERN, Deborah Lawrenson returns to the south of France with another captivating story of wartime love, secrets and bravery.

Present day. On a lush Mediterranean island off the French coast, Ellie has accepted a commission to restore an abandoned garden. It seems idyllic, but the longer Ellie spends at the house and garden, the more she senses darkness, and a lingering evil that seems to haunt her.

Second World War. Two very different women have their lives irrevocably changed: Iris, a junior intelligence officer in London and Marthe, a blind girl who works in the lavender fields of Provence and is slowly drawn into the heart of the Resistance. As secret messages are passed in scent and planes land by moonlight, danger comes ever closer...

Centred on a landscape gardener commissioned to restore a Second World War memorial garden, a blind women apprenticed in a perfume factory in Nazi-occupied Provence and an intelligence officer in wartime London, The Lantern author offers three novellas cleverly interconnected to form a tale of love, mystery and murder * BIG ISSUE IN THE NORTH *
an enthralling story of wartime love and bravery punctuated with evocative descriptions of the beautiful south of France * FRANCE MAGAZINE *
THE SEA GARDEN weaves a double spell, and honestly, it got me right from the start. Lawrenson steeps her story of the invisible heroes of the French Resistance crossing borders - and here, crossing time - deep in the eerie beauty of the South of France. The result is a marvellous strange fruit: think Graham Greene served up with a dash of Poe * Sarah Blake, author of The Postmistress *

Deborah Lawrenson spent her childhood moving around the world with diplomatic service parents, from Kuwait to China, Belgium, Luxembourg and Singapore. She graduated from Cambridge University and worked as a journalist in London. She is the author of five previous novels, including THE ART OF FALLING, chosen for the prestigious WHSmith Fresh Talent promotion, and SONG OF BLUE AND GOLD, inspired by the life of writer-traveller Lawrence Durrell. Deborah is married with a daughter, and lives in Kent. The family spends as much time as possible at a crumbling hamlet in Provence, France, which is the atmospheric setting for THE LANTERN.

GOR006087904
The Sea Garden by Deborah Lawrenson
Deborah Lawrenson
Used - Very Good
Paperback
Orion Publishing Co
2014-08-28
320
1409146189
9781409146186
N/A
Book picture is for illustrative purposes only, actual binding, cover or edition may vary.
This is a used book - there is no escaping the fact it has been read by someone else and it will show signs of wear and previous use. Overall we expect it to be in very good condition, but if you are not entirely satisfied please get in touch with us.