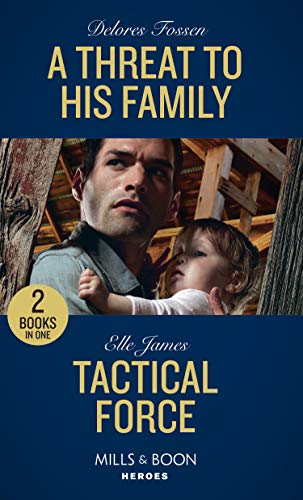 A Threat To His Family / Tactical Force
by Delores Fossen

A Threat to His Family
by Delores Fossen

He'll protect his child at any cost.

A Threat To His Family / Tactical Force Summary

A Threat to His Family
by Delores Fossen

He'll protect his child at any cost.

After discovering an intruder in his home, Deputy Owen Slater is terrified when he can't find his infant daughter, until he discovers his ranch manager Laney Martin keeping her safe. But to get to the truth of the break-in they'll need to work as a team -and share secrets buried long ago.

Their search for an assassin makes her the next target.

With a threat on the US President's life it's all-out war for former marine Jack Snow. But when he is tasked with protecting DC staff Anne Bellamy, his mission takes him undercover into Washington's power circles. Can he protect his country and the woman who's become far more than just an asset to him?

USA Today bestselling author, Delores Fossen, has sold over 70 novels with millions of copies of her books in print worldwide. She's received the Booksellers' Best Award, the Romantic Times Reviewers' Choice Award and was a finalist for the prestigious Rita (R). In addition, she's had nearly a hundred short stories and articles published in national magazines. You can contact the author through her webpage at www.deloresfossen.com Raised an Air Force brat, Elle James got her work ethic from her dad, creativity from mom and inspiration from her sister. As a member of the reserves, she's traveled, managed a career, and raised three children. She and her husband even raised ostriches and emus. Ask her what it's like to go toe-to-toe with a 350-pound bird! Former manager of computer programmers, Elle is happy to write full time in NW Arkansas.

GOR010261537
A Threat To His Family / Tactical Force: A Threat to His Family (Longview Ridge Ranch) / Tactical Force (Declan's Defenders) (Mills & Boon Heroes) by Delores Fossen
Delores Fossen
Used - Very Good
Paperback
HarperCollins Publishers
2019-12-12
448
0263280136
9780263280135
N/A
Book picture is for illustrative purposes only, actual binding, cover or edition may vary.
This is a used book - there is no escaping the fact it has been read by someone else and it will show signs of wear and previous use. Overall we expect it to be in very good condition, but if you are not entirely satisfied please get in touch with us.