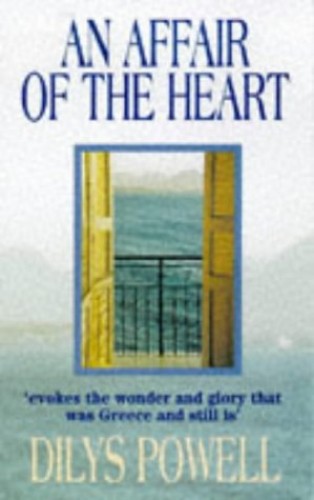 An Affair of the Heart
by Dilys Powell

In Stock
$13.99
+10% GST
An account of the author's experiences in Greece and relationships with Greek people between 1945 and the present day.
Very Good Well Read
Only 3 left

An Affair of the Heart Summary

An Affair of the Heart by Dilys Powell

"An Affair of the Heart" is that rare gem in travel writing, an unforgettable evocation of a country and its people on intimate knowledge and lasting affection. Hailed as a classic when it was first published more than fifty years ago, it has stood the test of time and is still regarded as one of the most outstanding books on Greece ever written. Dilys Powell, remembered, as the leading film critic of her day, spent many years is Greece before the Second World War, when her husband was Director of the British School of Archaeology in Athens. After his tragic early death she came back to Britain and it was only in 1945 that she was able to return. She set out to renew her love affair with the places and people she had known. She found hem changed and was at first disillusioned. But as she returned again and again she came to understand that although Greece, like an absent lover, had grown and moved on, its spirit was immortal, still the country of her heart. In this personal odyssey Dilys Powell not only gives a deeply moving account of her journeys, but draws us in to share her joy in a timeless land and its gallant, indestructible people.

An Affair of the Heart Reviews

"In its quiet way An Affair of the Heart remains a beguiling book which evokes the spirit of Greece with depth and sensitivity." -- . * Times Literary Supplement *
"Of permanent and universal value... a work which, in its genre and at its scale, comes within sight of perfection." -- . * New Statesman *
"Offers the best picture I know of Greece... beautiful and touching." -- . * Sunday Times *

GOR001953166
An Affair of the Heart by Dilys Powell
Dilys Powell
Used - Very Good
Paperback
Souvenir Press Ltd
1999-05-20
279
0285634976
9780285634978
N/A
Book picture is for illustrative purposes only, actual binding, cover or edition may vary.
This is a used book - there is no escaping the fact it has been read by someone else and it will show signs of wear and previous use. Overall we expect it to be in very good condition, but if you are not entirely satisfied please get in touch with us.