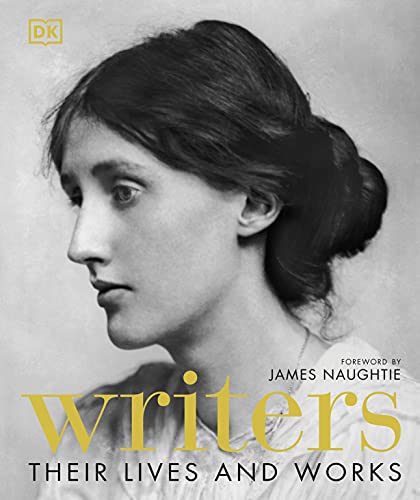 Writers: Their Lives and Works by DK

From Shakespeare and Jane Austen to Gabriel Garcia Marquez and Toni Morrison, delve into more than 100 biographies of the world's greatest writers.

Introduced with a stunning portrait of each featured novelist, playwright, or poet, biographical entries trace the friendships, loves, and rivalries that inspired each individual and influenced their work, revealing insights into the larger-than-life characters, plots, and evocative settings that they created.

Lavishly illustrated with photographs and paintings of writers' homes, studies, and personal artefacts - along with pages from original manuscripts, first editions, and their correspondence - this book introduces the key ideas, themes, and literary techniques of each writer, revealing the imaginations and personalities behind some of the world's greatest novels, short stories, poems, and plays. With a foreword introduction by James Naughtie, and covering an eclectic range of authors from the Middle Ages to the present day, Writers provides a compelling glimpse of the lives and loves of each great writer.

James Naughtie is an award-winning radio presenter and broadcaster, who began his career as a journalist before moving to radio presenting in 1986. For over 20 years he co-presented on BBC Radio 4's Today programme, and he has chaired Radio 4's monthly bookclub since it began in 1997. James Naughtie has chaired both the Man Booker and Samuel Johnson judging panels and written a number of books including The Rivals: The Intimate Story Of A Political Marriage; The Accidental American: Tony Blair And The Presidency; The Making Of Music; The New Elizabethans and The Madness of July.

GOR009487073
Writers: Their Lives and Works by DK
DK
Used - Like New
Hardback
Dorling Kindersley Ltd
2018-09-03
360
0241301947
9780241301944
N/A
Book picture is for illustrative purposes only, actual binding, cover or edition may vary.
The book has been read, but looks new. The book cover has no visible wear, and the dust jacket is included if applicable. No missing or damaged pages, no tears, possible very minimal creasing, no underlining or highlighting of text, and no writing in the margins.