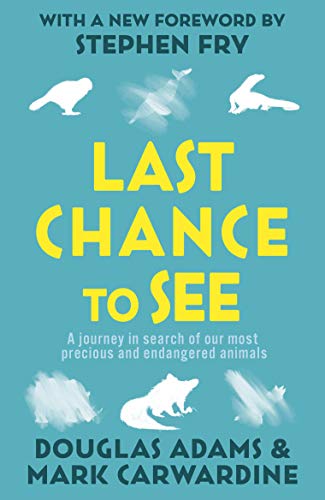 In Stock
$14.99
+10% GST
'Douglas Adams' genius was in using comedy to make serious points about the world' IndependentAfter years of reflecting on the absurdities of life on other planets, Douglas Adams teamed up with zoologist Mark Carwardine to find out what was happening to life on this one.
Very Good
5 in stock

'Douglas Adams' genius was in using comedy to make serious points about the world' Independent After years of reflecting on the absurdities of life on other planets, Douglas Adams teamed up with zoologist Mark Carwardine to find out what was happening to life on this one. Together they lead us on an unforgettable journey across the world in search of exotic, endangered creatures - animals that they may never get another chance to see. They encounter the animal kingdom in its stunning beauty, astonishing variety, and imminent peril: the giant Komodo dragon of Indonesia, the helpless but lovable Kakapo of New Zealand, the blind river dolphins of China, the white rhinos of Zaire, the rare birds of Mauritius island in the Indian Ocean. Both funny and poignant, Last Chance to See is the tale of an unforgettable wildlife odyssey - and a timely reminder of all that we must protect.

"In every case, the presence and personality of the endangered animals rise off the page - even when the authors don't manage to find them. The writing may be witty, but this book is a sobering reminder of what a very great deal we have to lose" * Independent on Sunday *
"This is life or death stuff, but Adams is a writer who chooses not to shake his finger at the reader. He fails completely in the self-righteous-piety department. Instead he invites us to enter a conspiracy of laughter and caring" * Los Angeles Times *
"It is a book one reads in a rush, always looking forward to the next perverse paragraph, wise insight or felicitous phrase" * The Canberra Times *
"Last Chance to See brings out the best in Adams' writing ... constantly springing on the reader the kind of dizzying shift in perspective that was the stock in trade of Hitchhiker'" * The Listener *
"The funniest serious book on the market." * Amazon.co.uk reader review *

DOUGLAS ADAMS was born in Cambridge in March 1952. He is best known as the creator of The Hitchhiker's Guide to the Galaxy, which started life as a BBC Radio 4 series. The book went on to be a No. 1 bestseller. He followed this success with The Restaurant at the End of the Universe (1980); Life, The Universe and Everything (1982); So Long and Thanks for all the Fish (1984); Mostly Harmless (1992) and many more. He sold over 15 million books in the UK, the US and Australia. Douglas died unexpectedly in May 2001 at the age of 49. Zoologist MARK CARWARDINE is an active and outspoken conservationist, award-winning writer, TV- and radio - presenter, widely published photographer, magazine columnist and consultant. He presented the weekly programme Nature on BBC Radio 4 for many years and is co-presenter, with Stephen Fry, of the BBC-TV series Last Chance to See. The author of more than 50 books, including several bestsellers, he has been Chairman of prestigious Wildlife Photographer of the Year Competition since 2005.

GOR001966316
Last Chance To See by Douglas Adams
Douglas Adams
Used - Very Good
Paperback
Cornerstone
2009-09-10
224
009953679X
9780099536796
N/A
Book picture is for illustrative purposes only, actual binding, cover or edition may vary.
This is a used book - there is no escaping the fact it has been read by someone else and it will show signs of wear and previous use. Overall we expect it to be in very good condition, but if you are not entirely satisfied please get in touch with us.