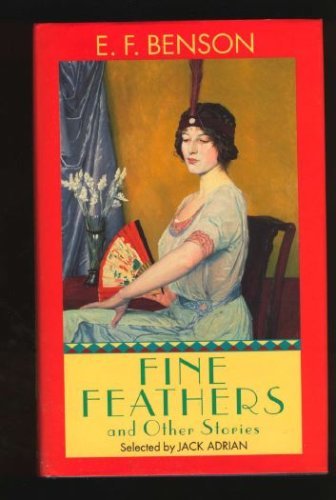 Fine Feathers and Other Stories
by E. F. Benson

Used Price
38,99 $
inc. GST
Free Shipping in Australia
Following the success of "Desirable Residences", this is a second collection of rare and entertaining stories by E.F. Benson. Originally written for magazines, only two of the 31 stories have appeared in book form before.
Reviews:
Trustpilot
Good

Fine Feathers and Other Stories Summary

Fine Feathers and Other Stories by E. F. Benson

Jack Adrian's first collection of E.F. Benson stories, Desirable Residences, marked the return of what Kirkus Reviews hailed as "the acid-tongued author of the peerless Lucia novels." After slipping into obscurity upon his death in 1940, Benson has undergone a tremendous revival, thanks to the work of Adrian and popular television adaptations of his Mapp and Lucia stories. Now comes a second collection of Benson's delightful short stories, some of which are newly discovered, and most of which have never been published in book form.
Fine Feathers captures the full expanse of Benson's long career, with stories ranging from 1894 to 1931. Here we find all of Benson's remarkably satirical wit, expressed in a delightful variety of stories. There are frothy comedies, tales of the supernatural, and biting stories of calamitous social gaffes, devastated pretensions, and clever swindles. These rare stories capture his skillful characterizations as well: one sequence of tales feature Amy Bondham, a figure very close to the celebrated Lucia of his popular Mapp and Lucia novels. Another story features the final appearance of the heroine Dodo, the character who first made the author famous; the woman who supposedly provided the model for Dodo once described her as a society girl, "a pretentious donkey with the heart and brains of a linnet." In "Dodo and the Brick," she sees off a social climber in fine style, as does the redoubtable Miss Ames in the title story. The collection also includes a little-known story with the ever-popular Miss Mapp, entitled "The Male Impersonator," in which she suffers a devastating retribution. And one of the stranger tales stars Benson himself, in "Atmospherics," as the author undergoes a mysterious and unsettling experience in his home town of Rye.
When Desirable Residences brought E.F. Benson back into the bookstore, Mapp and Lucia lovers were delighted at the chance to have their favorite author in hardcover. Now comes another outstanding anthology showing the master at his best--from society spoof to chilling supernatural tale.

About the Author:
E.F. Benson was an extremely prolific and popular novelist, whose works include Dodo and Queen Lucia, as well as various volumes of reminiscences.
About the Editor:
Jack Adrian is the author of several thrillers, and war and science fiction novels. He is an authority on twentieth-century popular and genre fiction and has compiled a number of anthologies and single-author collections, including a previous Benson anthology, Desirable Residences.