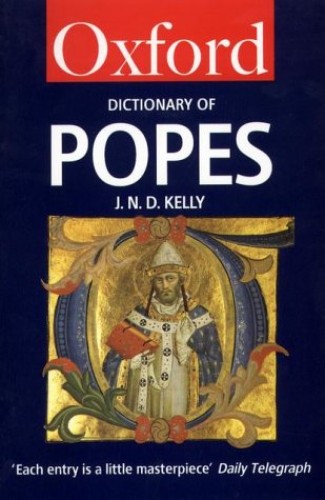 The Oxford Dictionary of Popes
by Edited by J.N.D. Kelly

In Stock
$10.49
+10% GST
Concise accounts of all the official popes and unofficial antipopes from St Peter to John Paul II including family and social background, pre-papal career and activities in office.
Very Good
Only 1 left

The Oxford Dictionary of Popes Summary

The Oxford Dictionary of Popes by Edited by J.N.D. Kelly

Writing for people of every religious allegiance, John Kelly gives concise accounts not only of all the officially recognized popes from St Peter to John Paul 11, but also of all their irregularly elected rivals, the so-called antipopes. Also listed is the legendary existence of a popess called Joan. Each pope and antipope's entry covers his family and social background and pre-papal career as well as his activities in office. The entries are arranged chronologically making this a continuous history of the papacy which has an unbroken existence of almost 2,000 years. It reveals how, for much of that history, spiritual and temporal power have been inextricably mingled in the person of the pope.

The Oxford Dictionary of Popes Reviews

About Edited by J.N.D. Kelly

J.N.D. Kelly is Canon of Chichester Cathedral, a Fellow of the British Academy, and since 1966 a member of the Academic Council of the Ecumenical Theological Institute, Jerusalem. He is the author of Early Christian Creeds, Early Christian Doctrines, The Epistles of Peter and of Jude, and Jerome.

GOR003634284
The Oxford Dictionary of Popes by Edited by J.N.D. Kelly
Edited by J.N.D. Kelly
Oxford Paperback Reference
Used - Very Good
Paperback
Oxford University Press
1988-01-28
368
0192820850
9780192820853
N/A
Book picture is for illustrative purposes only, actual binding, cover or edition may vary.
This is a used book - there is no escaping the fact it has been read by someone else and it will show signs of wear and previous use. Overall we expect it to be in very good condition, but if you are not entirely satisfied please get in touch with us.