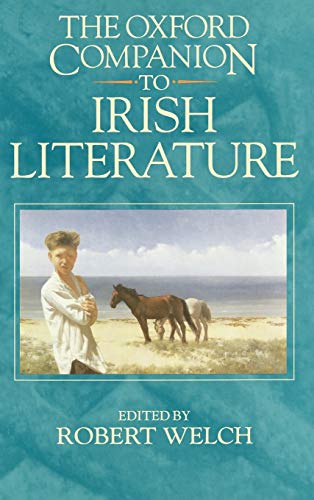 The Oxford Companion to Irish Literature
by Edited by Robert Welch (Professor of English, University of Ulster at Coleraine)

In Stock
$20.99
+10% GST
The literature of Ireland displays an exceptional richness and diversity - whether in Irish or English, by native Irish and Anglo-Irish writers or by outsiders. In over 2000 entries, this Companion surveys the Irish literary landscape across some 16 centuries.
Very Good Good
Only 1 left

The Oxford Companion to Irish Literature by Edited by Robert Welch (Professor of English, University of Ulster at Coleraine)

The literature of Ireland displays an exceptional richness and diversity - whether in Irish or English, by native Irish and Anglo-Irish writers or by outsiders like Edmund Spenser whose works were deeply imbued with the country in which he lived and wrote. In over 2,000 entries, the Companion to Irish Literature surveys the Irish literary landscape across some sixteen centuries, describing its features and landmarks. Entries range from ogam writing, developed in the 4th century, to the fiction, poetry, and drama of the l990s; and from Cu Chulainn to James Joyce. There are accounts of authors as early as Adomnan, 7th century Abbot of Iona, up to contemporary writers such as Roddy Doyle, Brian Friel, Seamus Heaney, and Edna O'Brien. Individual entries are provided for all major works, from Tain Bo Cuailnge - the Ulster saga reflecting the Celtic Iron Age - to Swift's Gulliver's Travels, Edgeworth's Castle Rackrent, O Cadhain's Cre na Cille, and Banville's The Book of Evidence. The Companion also illuminates the historical contexts of these writers, and the events which sometimes directly inspired them - the Famine of 1845-8, which provided a theme for novelists, poets, and memoirists from William Carleton to Patrick Kavanagh and Peadar O Laoghaire; the founding of the Abbey Theatre and its impact on playwrights such as J. M. Synge and Padraic Colum; the Easter Rising that stirred Yeats to the `terrible beauty' of `Easter 1916'. It offers a wealth of information on general topics, ranging from the stage Irishman to Catholicism, Protestantism, the Irish language, and university education in Ireland; and on genres such as annals, bardic poetry, and folksong. The majority of entries include a succinct bibliography, and the volume also provides a chronology and maps.

A good present . . .well worth its price of GBP8.99 * Irish post 25/11/2000 *
one consults an Oxford Companion for facts, not assessment, and you will find many cogent and extensive definitions here ... so much industry has gone into this undertaking that we should be grateful for all it contains in the way of information and illumination * Patricia Craig, The Independent *
heroic volume ... It surpasses previous exercises of a similar nature in the richness of its detail and the ecumenism of its approach. The system of cross-reference favoured in successive Oxford Companions proves to be perhaps the book's crowning glory. An act of critical interpretation in its own right, this book not only records the details of an immensely rich literature, but also helps to change the way in which we understand it. * Times Literary Supplement *
Editor Robert Welch ... has spent 10 years compiling the book. It has not been wasted. * Mario Basini, Cardiff Western Mail *
monumental ... The work has required 10 assiduous years to compile, and the author offers it as both reliable guide and stimulating companion to any reader wishing to delve into Ireland's surest indigenous industry, the written word * Anne Simpson, Glasgow Herald *
there could hardly be a better time to publish The Oxford Companion to Irish Literature ... the Companion gives a dizzyingly eclectic overview of Irish literature - and sometimes political - life * Ian McTear, Belfast Telegraph *
enlightening survey of Irish Literature * Tom Lawrence, Oxford Times *
the brief guides to further reading are admirably up-to-date ... The editor declares an intention to avoid jargon and he deserves heartfelt gratitude for succeeding. There is much to relish between the lines ... the Companion does more than plug a necessary gap in the unevenly-filled shelf of Irish reference books. It records and celebrates an extraordinarily distinguished intellectual achievement. * Roy Foster, The Times *
Anyone interested in following up the Irish literary institutions and concepts ... must acquire the new Oxford Companion to Irish Literature ... a hugely useful tool for checking and reference. * Victoria Glendinning, Daily Telegraph *
This book is a treasure chest of knowledge about the well-known and lesser-known writers responsible for Ireland's rich literary heritage. It is a mammoth work ... For anyone really interested in Irish literature it is a must ... a reference book that can be dug out and delved into whenever the need arises ... the book is a fine piece of work, and it should be in any serious Irish reader's library. * Pat Byrne, Irish World *
seriously good and enduring work, which will demand a place in the study of every scholar of Irish literature * Kevin Myers, The Irish Times (Dublin) *
it balances the needs of common readers, students and researchers looking for basic data outside their own fields ... extremely impressive ... To adapt Yeats, I can foresee this book becoming "my close companion many a year". Times Higher Education Supplement
The Oxford Companion to Irish Literature will come as a welcome tool to research students, not just in the field of Irish literary studies. The breadth of learning that informs the book is testament not just to the richness of the island's literary heritage, but also to the extent of scholarly activity, from antiquarianism to modernism, taking place in Irish historical and literary departments today. * Michael McAteer, Irish Review, No. 19 *
this book takes its place among the Oxford Companions with high distinction ... They are to be warmly congratulated on bringing their ten-year project to such a magnificent conclusion. This book has given me enormous pleasure and I recognize the depth and breadth of its scholarship on every page. * Meic Stephens, Planet, May '97 *
published to coincide with St. Patrick's Day and, if quality is any indication, appears to have received that patron Saint's blessing * Nineteenth-Century 51:3 (December 1996) *
This splendid guide covers both the Gaelic literature of Ireland and Irish literature in the English language with an arresting wealth of detail. * Scottish Book Collector, vol.5, no.9, Summer 1997 *

About Edited by Robert Welch (Professor of English, University of Ulster at Coleraine)

Robert Welch is Professor of English at the University of Ulster, Coleraine. Bruce Stewart is Lecturer in Irish Literary History and Bibliography at the same establishment.