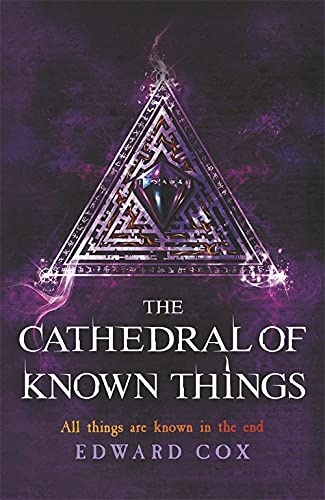 The Cathedral of Known Things
by Edward Cox

Used Price
$17.49
inc. GST
Free Shipping in Australia
In the end, all things are known. Return to the world of THE RELIC GUILD with this remarkable fantasy novel
Very Good

The Cathedral of Known Things Summary

The Cathedral of Known Things by Edward Cox

Divided, hunted and short on resources, the surviving members of the Relic Guild are in real trouble. Their old enemy, the Genii, and their resurrected master have infiltrated Labrys Town and taken over the police force.

So the Relic Guild must flee their home, and set off on a dangerous journey across the worlds of the Aelfir. One that will lead them to a weapon which might destroy the Genii. Or the whole universe...

And forty years before all this, the war which led to the fall of the Genii continues. And what happens to the Relic Guild during that conflict will change the course of their desperate flight.

The Cathedral of Known Things Reviews

Interested parties, worriers such as myself, you have nothing to fear. I can confirm that you can rest easy, safe in the knowledge that The Relic Guild have returned and they are bringing Hell with them. How very splendid. * The Eloquent Page *
Debut author Ed Cox has created a lush, detailed world while also hinting at a larger backstory that will be revealed in volumes to come * SFX *
an exiting blend of steampunk, fantasy, horror and pulp adventure....The relic Guild is an intriguing, original and enjoying book * Starburst *
I soon found myself engaged in the richness of Labrys Town and its varied residents. The story structure itself was split between many different perspectives and two different timelines, but this never felt confusing. Instead it was this structure that drew me in, wondering what had happened in the past that would lead to the events in the present * Fantasy Book Review *
Overall this is a high concept fantasy packed with ideas, weird and wonderful characters and a mix of styles, at times evoking noir, urban fantasy, flavours of steampunk (in the depiction of anachronistic technology) and grotesque body-horror David Cronenberg would be proud of. Thought you knew where modern fantasy was at? The Relic Guild will challenge your assumptions. * British Fantasy Society *
Edward Cox writes one heck of a scary, intriguing ride and right now I'm finding it rather moreish * The Book Bag *
The Relic Guild is like a twisting, looping, and flipping ride of a cosmic roller-wonder coaster and who knows where the author is going to take us in future books. I found that there was touches of an almost 2000AD influence with The Retrospective (a dangerous no mans land outside the labyrinth) being a kind of Cursed Earth and the novel did, at times, have a Doctor Who feel to it. * Sleepless Musings *
I loved this book, it's a unique read that's an action packed and magic fuelled delight of well written prose. It's epic and worth each and every page * Gizmo's Book Shelf *
f you're looking for a fantasy with plenty of original ideas, where the world is detailed and dark, where the characters intrigue and delight and where the plot draws you in and takes you on a magical journey then I think I've found the book for you. Edward Cox's debut novel, 'The Relic Guild' is a real page-turner of a book and I'm already impatient for the next book in the series. * SF Crowsnest *
The Relic Guild is an awesome book and that doesn't even come close.... if you are looking for a something refreshing to read pick it up, if you are looking for a next read, pick it up. Well, make sure this book is the next thing that touches your hands, you don't want to miss out on it! BRING BOOK TWO! * The Book Plank *
This is an exciting debut from a writer who plainly loves what he has made and I'm looking forward to the sequel already. * SF Book *
This is smart, energetic fantasy that grips you from page one and delivers a genuinely memorable experience. * The Eloquent Page *
If you like your fantasy gothic (though not overly grimdark) in atmosphere, populated by interesting and varied characters, and a fast-but-not-rushed pace, thenThe Relic Guild is for you. I really enjoyed this, and can't wait for the second in the series, and to see how the characters, world and story develop. * Civilian Reader *
A brilliant first novel from Cox. With a well thought out plot and imaginative characters....An engaging new fantasy novel that is well worth a read. * Geek Syndicate *
A terrific debut novel, with plenty of scope for expansion and some really good world-building. Most importantly, lots of fun. -- Joanne M Harris, author of Gospel of Loki

Edward Cox began writing stories at school as a way to pass time in boring lessons. With his first short story published in 2000, Edward spent much of the next decade earning a BA first class with honours in creative writing, and a Master degree in the same subject. He then went on to teach creative writing at the University of Bedfordshire.

Currently living in Essex with his wife and daughter, Edward is mostly surrounded by fine greenery and spiders the size of his hand. THE RELIC GUILD is his first completed novel, and it is the result of more than ten years of obsessive writing.

GOR007736631
The Cathedral of Known Things by Edward Cox
Edward Cox
Used - Very Good
Paperback
Orion Publishing Co
2016-05-12
480
1473200342
9781473200340
N/A
Book picture is for illustrative purposes only, actual binding, cover or edition may vary.
This is a used book - there is no escaping the fact it has been read by someone else and it will show signs of wear and previous use. Overall we expect it to be in very good condition, but if you are not entirely satisfied please get in touch with us.