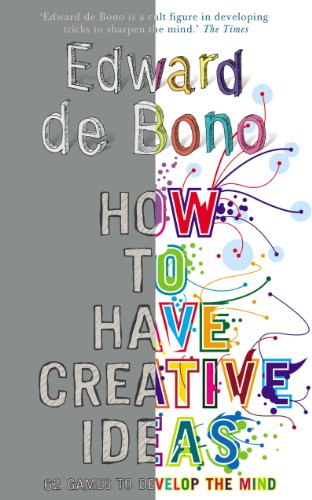 How to Have Creative Ideas
by Edward De Bono

In Stock
$10.49
+10% GST
In How to Have Creative Ideas Edward de Bono - the leading authority on creative thinking - outlines 62 different games and exercises, built around random words chosen from a list, to help encourage creativity and lateral thinking.
Very Good Good
12 in stock

How to Have Creative Ideas Summary

How to Have Creative Ideas: 62 exercises to develop the mind by Edward De Bono

Everybody wants to be creative. Creativity makes life more fun, more interesting and more full of achievement, but too many people believe that creativity is something you are born with and cannot be learned. In How to Have Creative Ideas Edward de Bono - the leading authority on creative thinking - outlines 62 different games and exercises, built around random words chosen from a list, to help encourage creativity and lateral thinking. For example, if the task were to provide an idea for a new restaurant and the random word chosen was 'cloak', ideas generated might be: a highwayman theme; a Venetian theme with gondolas; masked waiters and waitresses. Or, if asked to make a connection between the two random words 'desk' and 'shorts', readers may come up with: both are functional; desks have 'knee holes' and shorts expose the knees; traditionally they were both male-associated items. All the exercises are simple, practical and fun, and can be done by anyone.

How to Have Creative Ideas Reviews

"The master of creative thinking" * Independent on Sunday *
"Edward doesn't just think. He is a one-man global industry, whose work is gospel in government, universities, schools, corporates and even prisons all over the world" * Times 2 *
"Edward de Bono is a cult figure in developing tricks to sharpen the mind" * The Times *
"Simple, practical and great fun. Best of its kind." * Management Today *
"Edward de Bono is a toolmaker, his tools have been fashioned for thinking, to make more of the mind" * Peter Gabriel *

Edward de Bono studied at Christ Church, Oxford (as a Rhodes Scholar). He also holds a PhD from Cambridge and an MD from the University of Malta. He has held appointments at the universities of Oxford, London, Cambridge and Harvard. In 1967 de Bono invented the now commonly used term 'lateral thinking' and, for many thousands, indeed millions, of people worldwide, his name has since become a symbol of creativity and new thinking. He has written numerous books, which have been translated into 34 languages, and his advice is sought by Nobel laureates and world leaders alike. www.debono.com

GOR001653698
How to Have Creative Ideas: 62 exercises to develop the mind by Edward De Bono
Edward De Bono
Used - Very Good
Paperback
Ebury Publishing
2007-04-26
192
009191048X
9780091910488
N/A
Book picture is for illustrative purposes only, actual binding, cover or edition may vary.
This is a used book - there is no escaping the fact it has been read by someone else and it will show signs of wear and previous use. Overall we expect it to be in very good condition, but if you are not entirely satisfied please get in touch with us.