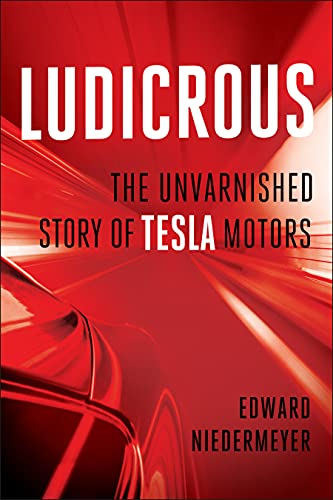 With unique blend of original reporting and deep analysis, journalist Edward Niedermeyer reveals the ugly reality hidden behind Tesla's popular mythology and explains why Tesla is more likely to end up as a transitional figure in automotive history than the next industrial juggernaut.

Ludicrous: The Unvarnished Story of Tesla Motors by Edward Niedermeyer

Tesla is the most exciting car company in a generation . . . but can it live up to the hype?

Tesla Motors and CEO Elon Musk have become household names, shaking up the staid auto industry by creating a set of innovative electric vehicles that have wowed the marketplace and defied conventional wisdom. The company's market valuation now rivals that of long-established automakers, and, to many industry observers, Tesla is defining the future of the industry.

But behind the hype, Tesla has some serious deficiencies that raise questions about its sky-high valuation, and even its ultimate survival.

Tesla's commitment to innovation has led it to reject the careful, zero-defects approach of other car manufacturers, even as it struggles to mass-produce cars reliably, and with minimal defects. While most car manufacturers struggle with the razor-thin margins of mid-priced sedans, Tesla's strategy requires that the Model 3 finally bring it to profitability, even as the high-priced Roadster and Model S both lost money. And Tesla's approach of continually focusing on the future, even as commitments and deadlines are repeatedly missed, may ultimately test the patience of all but its most devoted fans.

In Ludicrous, journalist and auto industry analyst Edward Niedermeyer lays bare the disconnect between the popular perception of Tesla and the day-to-day realities of the company-and the cars it produces. Blending original reporting and never-before-published insider accounts with savvy industry analysis, Niedermeyer tells the story of Tesla as it's never been told before-with clear eyes, objectivity and insight.

Edward Niedermeyer began covering the auto industry in 2008, quickly establishing himself as a leading chronicler and critic of the struggles and bailouts of GM and Chrysler. More recently he has focused on the collision between the auto industry and high tech sector, and the reinvention of the automobile. His work on automotive topics has been featured in the New York Times, Wall Street Journal, BloombergView, The Daily Beast, The Verge, and elsewhere. He is currently the cohost of The Autonocast, a podcast about the future of mobility. He lives in Portland, Oregon.

8 The Lovers and the Haters

14 The Machine That Builds the Machine

15 The Empire Strikes Back

17Where the Rubber Meets the Road

NGR9781950665655
9781950665655
1950665658
Ludicrous: The Unvarnished Story of Tesla Motors by Edward Niedermeyer
Edward Niedermeyer
New
Paperback
BenBella Books
2021-01-28
220
N/A
Book picture is for illustrative purposes only, actual binding, cover or edition may vary.
This is a new book - be the first to read this copy. With untouched pages and a perfect binding, your brand new copy is ready to be opened for the first time
Trustpilot