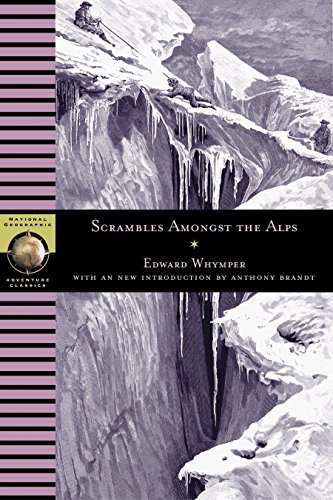 Scrambles Amongst The Alps
by Edward Whymper

Scrambles Amongst The Alps Summary

Scrambles Amongst The Alps by Edward Whymper

Scrambles Amongst the Alps describes nine years Whymper spent climbing in the Alps, from 1860 to 1869, a time when mountain climbing was just starting to become an international sport getting international headlines. Whymper was a prodigious climber; he once gained 100,000 feet of altitude in the mountains in something like 30 days, attacking peaks with an energy and determination that remain remarkable to this day. But the big kahuna was the Matterhorn, and the book spends much of its time on Whymper's seven failed attempts at it, and on the eighth, in which he summited, and four men died. The book makes an excellent guide on this account to the history of early climbing and climbing techniques.

Edward Whymper (1840-1911) was an English mountaineer and explorer with dozens of first ascents under his belt, the most famous being that of the Matterhorn. Also an author and illustrator, he wrote several books on his profession, including Travels Amongst the Great Andes of the Equator and the classic Scrambles Amongst the Alps.

Anthony Brandt attended Princeton and Columbia before becoming a freelance writer for Esquire, American Heritage, The Atlantic, Psychology Today, GQ, Men's Journal, National Geographic Adventure, and many other magazines. He was the essays editor of the Pushcart Prize for 18 years and has served as a nonfiction judge for the National Book Awards. Brandt is the editor of the Adventure Classics series for National Geographic Books, including the first edition of The Journals of Lewis and Clark.

GOR001887414
Scrambles Amongst The Alps by Edward Whymper
Edward Whymper
Used - Very Good
Paperback
National Geographic Books
2002-10-01
320
0792269233
9780792269236
N/A
Book picture is for illustrative purposes only, actual binding, cover or edition may vary.
This is a used book - there is no escaping the fact it has been read by someone else and it will show signs of wear and previous use. Overall we expect it to be in very good condition, but if you are not entirely satisfied please get in touch with us.