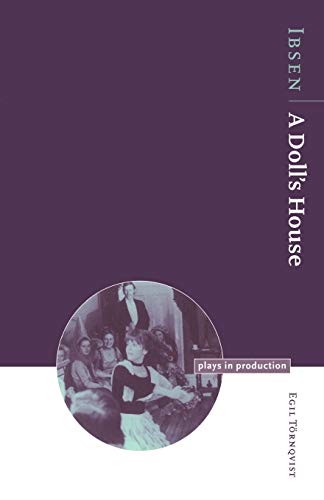 In Stock
$16.49
+10% GST
Ibsen's A Doll's House is one of the most widely debated plays, but do we refer to the original text, translation, stage presentation, radio version or film and television adaptations? This 1995 critical study examines how the choice of medium and directorial approaches have influenced the meaning of the play text.
Very Good Good
Only 4 left

This 1995 critical study of Ibsen's A Doll's House addresses fundamental questions of text, reception and performance. What is the definitive 'version' of A Doll's House: original text, translation, stage presentation, radio version, adaptation to film or television? What occurs when a drama intended for recipients in one language is translated into another, or when a play written for the stage is adapted for radio, television or film? And to what extent do differences between the media and between directorial approaches influence the meaning of the play text? Discussions of these issues include an internal analysis of the dramatic text and comparative performance analysis, framed by the biographical background to the play and its impact on dramas by Strindberg, Shaw and O'Neill and on films by Ingmar Bergman. The book concludes with a list of productions and a select bibliography.

GOR002797960
Ibsen: A Doll's House by Egil Tornqvist
Egil Tornqvist
Plays in Production
Used - Very Good
Paperback
Cambridge University Press
1995-04-27
228
0521478669
9780521478663
N/A
Book picture is for illustrative purposes only, actual binding, cover or edition may vary.
This is a used book - there is no escaping the fact it has been read by someone else and it will show signs of wear and previous use. Overall we expect it to be in very good condition, but if you are not entirely satisfied please get in touch with us.