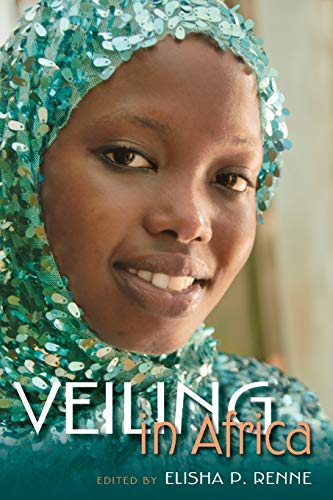 The tradition of the veil, which refers to various cloth coverings of the head, face, and body, has been little studied in Africa, where Islam has been present for more than a thousand years. These lively essays raise questions about what is distinctive about veiling in Africa, what religious histories or practices are reflected in particular uses of the veil, and how styles of veils have changed in response to contemporary events. Together, they explore the diversity of meanings and experiences with the veil, revealing it as both an object of Muslim piety and an expression of glamorous fashion.

[T]he value of this volume is in its detailed coverage of veiling manifestations in Africa, which indeed fills a descriptive gap. It also explores diverse meanings of veiling, which are added to our understanding of the phenomenon. May 2016

This is an exciting and strong collection of original research on women's-and men's-veiling practices in a range of African Muslim settings and the social and religious discourses that accompany changes in dress over time. Taken as a whole, it offers a fascinating overview of African Muslim interpretations of theological debates about 'the veil' and gender relations in Muslim societies while illustrating some of the particular accommodations adopted by African women.

Overall, Veiling in Africa represents a valuable perspective on a less investigated topic that could be very interesting and novel for Western audiences. And, finally, it should be mentioned that in addition to the general readers, this volume could be of interest to anthropologists, psychologists, and sociologists as well as students of these fields who are interested in both African studies and Islamic cultural practices.

Elisha P. Renne is Professor in the Department of Anthropology and the Department for Afroamerican and African Studies at the University of Michigan. She is author of The Politics of Polio in Northern Nigeria (IUP, 2010).

Part III. Veiling/Counter-Veiling
7. Invoking Hijab: The Power Politics of Spaces and Employment in Nigeria
Hauwa Mahdi
8. We Grew Up Free but Here We Have to Cover Our Faces: Veiling among Oromo Refugees in Eastleigh, Kenya Peri M. Klemm
9. Vulnerability Unveiled: Lubna's Pants and Humanitarian Visibility on the Verge of Sudan's Secession Amal Hassan Fadlalla

NLS9780253008206
9780253008206
0253008204
Veiling in Africa by Elisha P. Renne
Elisha P. Renne
African Expressive Cultures
New
Paperback
Indiana University Press
20130604
248
N/A
Book picture is for illustrative purposes only, actual binding, cover or edition may vary.
This is a new book - be the first to read this copy. With untouched pages and a perfect binding, your brand new copy is ready to be opened for the first time
Trustpilot