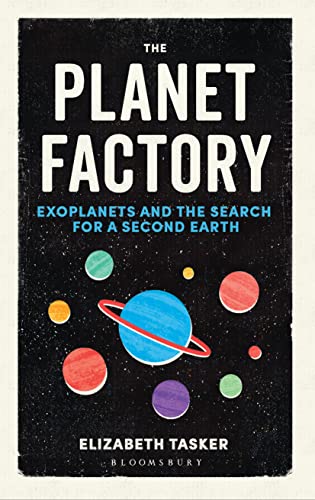 The Planet Factory
by Elizabeth Tasker

The Planet Factory: Exoplanets and the Search for a Second Earth by Elizabeth Tasker

Twenty years ago, the search for planets outside the Solar System was a job restricted to science-fiction writers. Now it's one of the fastest-growing fields in astronomy with thousands of exoplanets discovered to date, and the number is rising fast. These new-found worlds are more alien than anything in fiction. Planets larger than Jupiter with years lasting a week; others with two suns lighting their skies, or with no sun at all. Planets with diamond mantles supporting oceans of tar; possible Earth-sized worlds with split hemispheres of perpetual day and night; waterworlds drowning under global oceans and volcanic lava planets awash with seas of magma. The discovery of this diversity is just the beginning. There is a whole galaxy of possibilities. The Planet Factory tells the story of these exoplanets. Each planetary system is different, but in the beginning most if not all young stars are circled by clouds of dust, specks that come together in a violent building project that can form colossal worlds hundreds of times the size of the Earth. The changing orbits of young planets risk dooming any life evolving on neighbouring worlds or, alternatively, can deliver the key ingredients needed to seed its beginnings. Planet formation is one of the greatest construction schemes in the Universe, and it occurred around nearly every star you see. Each results in an alien landscape, but is it possible that one of these could be like our own home world?

A precious compendium on what we can say about the formation of planets, and how much our knowledge has progressed in recent years. * Nature *
Packed with interesting insights and scientific content that capably captures the current state of exoplanet research. * Sky at Night *
If you've always been intrigued by extrasolar planets - or even if you haven't! - you'll want to move this book to the top of your reading list. * Sky & Telescope *
Engaging and informative ... a great introduction to a relatively new and fast-changing aspect of scientific endeavour. * Engineering and Technology *
Brilliantly written ... Tasker highlights how difficult the hunt for planets is. I highly recommend this book. * Physics World *
This splendidly readable and authoritative book succeeds at the near-impossible task of explaining all you need to know about the revolutionary and fast-moving scientific field that's seeking out these new worlds and what may be lurking on them. -- Caleb Scharf, Directory of Astrobiology, Columbia University
Elizabeth Tasker is the perfect guide in this astronomical adventure story; she brings the world's leading planet hunters vividly to life and demystifies the crucial technical details of the research with impressive clarity and a light, engaging touch. -- Michael D. Lemonick, Chief Opinion Editor at Scientific American and the author of Mirror Earth: The Search for Our Planet's Twin
In a lively science narrative spiced with a sly humour, Elizabeth Tasker makes learning about the planets of our Solar System and beyond into a rich and rewarding pleasure. -- Marc Kaufman, author of First Contact and Mars Up Close, and founder of NASA'S online column 'Many Worlds'
Elizabeth Tasker's book is a surprisingly complete description of the current state of astronomy of extrasolar planets, presented in a way that is extremely entertaining and accessible. I highly recommend it to everyone who would like to get acquainted with this still-new, fascinating field of science. -- Aleksander Wolszczan, discoverer of the first exoplanet

Elizabeth Tasker is an astrophysicist who spends her time building fake universes inside a computer. After a degree in theoretical physics, she went on to complete her doctorate at Oxford before moving across to the United States and Canada to build stars on any computer she was given access to. She later crossed the globe again to Japan, and is now an associate professor at the Japan Aerospace Exploration Agency (JAXA). Elizabeth has been a keen science communicator for many years and has written for Scientific American and Astronomy Magazine, as well as articles for sites that include Nautilus, the Conversation and space.com. @girlandkat / girlandkat.com

GOR009784600
The Planet Factory: Exoplanets and the Search for a Second Earth by Elizabeth Tasker
Elizabeth Tasker
Used - Very Good
Paperback
Bloomsbury Publishing PLC
2019-02-21
352
147291774X
9781472917744
N/A
Book picture is for illustrative purposes only, actual binding, cover or edition may vary.
This is a used book - there is no escaping the fact it has been read by someone else and it will show signs of wear and previous use. Overall we expect it to be in very good condition, but if you are not entirely satisfied please get in touch with us.