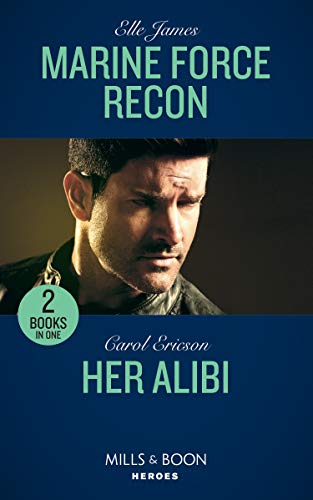 Declan O'Neill's Marine career is over, but nothing can stop him from saving lives. When he starts an organization to help people defend themselves, Grace Lawrence, is a woman desperate for answers. Though she wonders if she can trust herself with man like Declan.

HER ALIBI by Carol Ericson

Desperation drove her to his doorstep

Savannah Martell has no memory of how she ended up next to her philandering ex-husband's dead body. Facing too many unanswerable questions, she turns to Connor Wells. Years ago, their romance burned hot and deep, but does the flame still smoulder?

Raised an Air Force brat, Elle James got her work ethic from her dad, creativity from mom and inspiration from her sister. As a member of the reserves, she's traveled, managed a career, and raised three children. She and her husband even raised ostriches and emus. Ask her what it's like to go toe-to-toe with a 350-pound bird! Former manager of computer programmers, Elle is happy to write full time in NW Arkansas. Carol Ericson lives in southern California, home of state-of-the-art cosmetic surgery, wild freeway chases, and a million amazing stories. These stories, along with hordes of virile men and feisty women clamor for release from Carol's head until she sets them free to fulfill their destinies and her readers' fantasies. To find out more about Carol and her current books, please visit her website at www.carolericson.com, "where romance flirts with danger."

GOR009724901
Marine Force Recon: Marine Force Recon / Her Alibi (Mills & Boon Heroes) by Elle James
Elle James
Used - Very Good
Paperback
HarperCollins Publishers
2019-03-07
448
0263274101
9780263274103
N/A
Book picture is for illustrative purposes only, actual binding, cover or edition may vary.
The book has been read but remains in clean condition. All pages are intact and the cover is intact. Some minor wear to the spine.