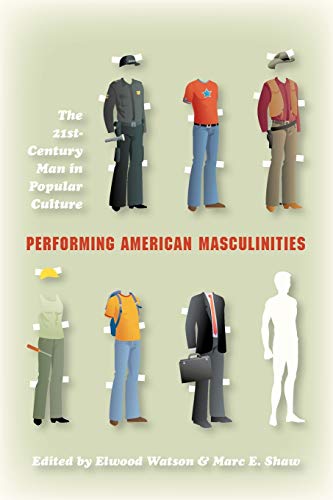 This collection highlights the fluidity of masculinity in American popular culture at the turn of the new millennium and beyond by examining possibilities for male identity formation. Each chapter mines American popular culture-theatre, film, literature, music, advertising, internet content, television, photography, and current events-to pose questions about the process of gender creation and the contestation of masculinities as constantly changing political forms. The first section explores masculinities within late capitalism and includes studies of Seinfeld, Queer Eye for the Straight Guy, and reality television. The second section addresses identity when masculinity intersects with race, religion, disability, and sexuality, including chapters on Barack Obama, the O.J. trial, and popular movies.

This overview of turn-of-the-millennium sexual identities examines the contradictions and instabilities inherent in latter-day American masculinity as evidenced in pop culture. ... A fine contribution to contemporary gender criticism. ...Highly recommended.October 2011

Into this [cultural studies] minefield, 'Performing American Masculinities' steps and, given its expansive scope of inquiry (ranging from Seinfeld [NBC, 1989-1998] to Obama), attempts to cover a lot of ground. An admirable . . . ambition to map representational through-lines across textual forms and to address both fictional performances and real embodiments of American masculinity . . . .Fall 2013

Performing American Masculinities is a good introductory text for studying depictions of masculinities in popular culture. The information and analysis presented in the book are accessible to an interdisciplinary audience . . .17.1 April 2014

With a judicious balance between gender theory and pop-cultural readings, Performing American Masculinities offers a diverse and exciting collection suited to a variety of disciplines and projects. The text provides a cogent introduction to masculinities and a specialized focus that marks the potential of masculinity studies through popular culture. RICKI LAKE SHOW

Elwood Watson is Professor of History, African American Studies, and Gender Studies at East Tennessee State University. He is author of Outsiders Within: Black Women in the Legal Academy after Brown v. Board.

Marc E. Shaw is Assistant Professor of Theatre Arts at Hartwick College. His recent publications include contributions to the book Twilight and Philosophy.

Part 1. Masculinities and the Market: Late Capitalism and Corporate Influence on Gender Processes
1. Masters of Their Domain: Seinfeld and the Discipline of Mediated Men's Sexual Economy / C. Wesley Buerkle
2. Sexually Suspect: Masculine Anxiety in the Films of Neil LaBute / Brenda Boudreau
3. The Might of the Metrosexual: How a Mere Marketing Tool Challenges Hegemonic Masculinity / Margaret C. Ervin
4. Fathers, Sons, and Business in the Hollywood Office Movie / Latham Hunter

Part 2. Beyond Gender Alone: Defining Multidimensional Masculinities
5. Popular Memory, Racial Construction, and the Visual Illusion of Freedom: The Re-mediation of O.J. and Cinque / John Kille
6. Obama's Masculinities: A Landscape of Essential Contradictions / Marc E. Shaw and Elwood Watson
7. The Male Rapunzel in Film: The Intersections of Disability, Gender, Race, and Sexuality / Johnson Cheu and Carolyn Tyjewski
8. Masculinities in Dating Relationships: Reality and Representation at the Intersection of Race, Class, and Sexual Orientation / Jimmie Manning
9. Do You Have What It Takes to Be a Real Man?: Female-to-Male Transgender Embodiment and the Politics of the Real in A Boy Named Sue and Body Alchemy / Michel J. Boucher

NLS9780253222701
9780253222701
0253222702
Performing American Masculinities: The 21st-Century Man in Popular Culture by Elwood Watson
Elwood Watson
New
Paperback
Indiana University Press
20110421
252
N/A
Book picture is for illustrative purposes only, actual binding, cover or edition may vary.
This is a new book - be the first to read this copy. With untouched pages and a perfect binding, your brand new copy is ready to be opened for the first time
Trustpilot