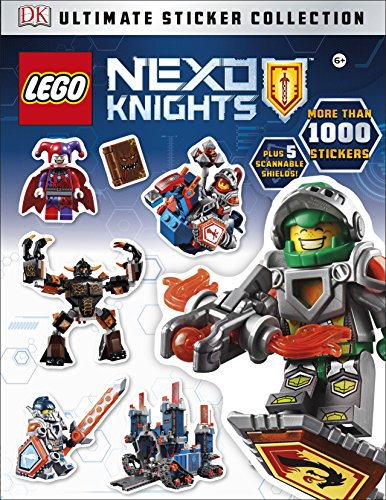 Jump into a futuristic knights' realm with action-packed scenes and more than 1,000 stickers from this brand new Lego (registered) theme. Featuring scannable toys-to-life content, this title is suitable for young heroes everywhere.

In the LEGO NEXO KNIGHTS Ultimate Sticker Collection, learn how Aaron, Axl, Clay, Macy and Lance stop the villainous Jestro and his band of lava monsters from taking over the Knighton. Create your own LEGO sticker scenes within the exciting realm of Knighton. Learn what it takes to graduate from Knights' Academy. Go on thrilling quests and engage in heroic battles against beastly, magical monsters.

GOR007611105
9780241232231
0241232236
LEGO NEXO KNIGHTS Ultimate Sticker Collection by Emma Grange
Emma Grange
Used - Very Good
Paperback
Dorling Kindersley Ltd
2016-02-29
96
N/A
Book picture is for illustrative purposes only, actual binding, cover or edition may vary.
This is a used book - there is no escaping the fact it has been read by someone else and it will show signs of wear and previous use. Overall we expect it to be in very good condition, but if you are not entirely satisfied please get in touch with us
Trustpilot